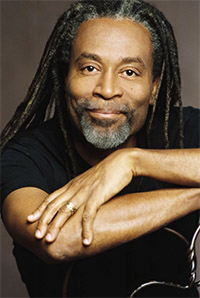 Vocal innovator Bobby McFerrin will take the stage in Sauder Concert Hall for this year’s Performing Arts Series Valentine’s Day concert. This will be McFerrin’s second appearance on the Sauder stage.

McFerrin last performed in Goshen during the winter of 2009. According to Maryn Munley, performance venue production manager at the Goshen College Music Center, his 2009 performance was a “huge hit.” This weekend’s concert is also expected to be a major success, especially because this time, McFerrin will be joined onstage by Goshen College’s own Chamber Choir, who performed last year with Garrison Keillor.

Katie Shank, a sophomore alto, is thrilled to have the opportunity to perform with McFerrin. She said, “I’m a little nervous because everything Bobby does is improvised, but I’m also excited because he’s a phenomenal artist and performer.”

The Chamber Choir joins a prestigious line of performers with whom McFerrin has worked in the past, including Jack Dejohnette, percussionist; Robin Williams, comedian; Wynton Marsalis, trumpeter; Yo-Yo Ma, cellist; and Chick Corea, jazz pianist.

Best known for his 1988 hit “Don’t worry, be happy,” McFerrin has received 10 Grammy awards throughout his career. McFerrin released his first album in 1982 and has continued to produce music since. His most recent album is the 2013 work “Spirityouall,” a reinvention of well-known Americana tunes like “He’s Got the Whole World” and “Glory,” and also features original work.

McFerrin is known for his innovation during performances. He avoids creating playlists and instead improvises, bringing the audience into his music-making.

Munley said, “Mr. McFerrin is an incredibly accomplished musician who has a niche talent which will make his concert very different than other concerts in the season.”

According to a review by the Los Angeles Times, “Bobby McFerrin’s greatest gift to his audience may be changing them from spectators into celebrants and transforming a concert hall into a playground, a village center, a joyous space.”

On McFerrin’s website, he explains his philosophy of the human voice, saying, “The voice gets to the soul of a person more than any other instrument. Because it’s the voice. It sings, it talks, it cries, it laughs, it squeals, it barks, it shouts and it whispers. There is no other instrument that can do that. We’re born with it.”

McFerrin believes that a musician should create music with an audience rather than for them. He says, “What I want everyone to experience at the end of my concerts is. . .this sense of rejoicing. I don’t want the audience to be blown away by what I do, I want them to have this sense of real joy, from the depths of their being. Then you open up a place where grace can come in.”

To bring about this sense of real joy, McFerrin draws from a variety of musical genres, including everything from Bach to R&B, jazz and world music.

He is known for his experimentation with scat singing, vocal percussion and polyphonic overtones.

McFerrin will come to Goshen from a performance at Riverside Casino & Golf Resort in Riverside, IA, and will next appear in April at a performance in Louisville, KY.

According to Lisa Weaver, the Goshen College Welcome Center coordinator, this Sunday’s 4 p.m. concert is already sold out, marking it as the most popular concert in this year’s PAS season.