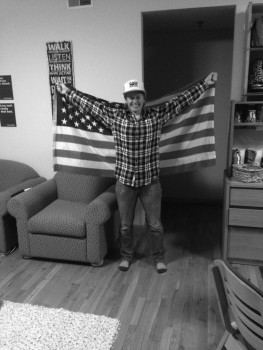 In an electoral event for the history books, presidential hopeful “Other” won BOTH the Republican and Democratic polls.

In the Democratic race, a checkmark next to the “Other” box followed by a blank space in the suggestions line was the clear winner.

On the Republican side, “Other” won, with most voters adding, “Literally anyone else. Please.”

While this year’s presidential race features a range of candidates from the Herculean to the ones who just showed up wearing a suit, it appears the citizens of the US of A would prefer no one over any of the actual candidates.

Joe the Plumber, a local Iowan who voted in the Democratic poll, said, “I don’t really know anything about ‘Other,’ but I didn’t really care for any of the others, so I figured, why not?”

For other voters, “Other” was simply the logical choice for president. Lynne Stone, a Republican voter and part-time online activist, avowed, “I was always taught to choose the lesser of two evils. There were more than two, so I voted for ‘literally anyone else.’ I know I for one trust ‘Other’ more than any of the other candidates.”

It should be noted that Sen. Sanders won 12 percent of the votes, likely due to the results of a poll last weekend that revealed he was the only candidate to correctly name the capital of Iowa. He was the only one declared not a clear loser, but more of a vague loser.

The losing presidential candidates’ responses ranged from awe to dazed. “Iowa? More like Io Won! Make sure you write that one down,” said a clearly blissfully ignorant Donald Trump.

Sanders, the Democratic nominee, confessed to voting for Martin O’Malley. “I want to show the American people that I will continue to support the forgotten left at the bottom of the pile, even in my conquest towards victory,” he said. The rest was incoherent muttering about the economy.

Hillary Clinton could not be reached for comment, but was seen huddled in the corner, rocking back and forth with a cool towel on her neck, muttering “I was the female candidate. I was supposed to win. I am a strong, independent woman. I WILL win.”

President Obama, who is anxiously awaiting his retirement, was interviewed by phone for his view on the early results. In response to being asked what he thought of the race for the next leader for The Greatest Nation in the Universe, only a drawn-out, audible sigh could be heard.

With the door now wide open for literally anyone to run for president, new predictions for the front-runners are surfacing.

With a new baby, Kanye West will pull the “relatable, loving father” card and announce his earlier-than-planned candidacy.

History tends to repeat itself for better or for worse, so why not stick with what worked before? The remains of Abraham Lincoln with their strong but silent approach could fare well.

No one knows patriotism like Sam the Eagle, though some accuse him of being merely a puppet.

Clarisse Renaldi, former queen of Genovia, brings all the grace, class and wisdom that a token female candidate should bring.