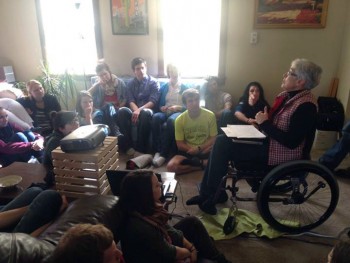 “Transformative” is sometimes an over-used term that is thrown about as a buzzword or marketing ploy. At its core, to be transformative something has to identifiably change a perspective, opinion or state of being.

Over Martin Luther King Jr. weekend, several students had such an opportunity to be transformed by the taking a weekend class titled “Conversations on Race” with Regina Shands Stoltzfus, assistant professor of peace, justice and conflict studies. The students prepared by reading “The New Jim Crow” by Michelle Alexandra.

During the class on Friday and Saturday, the students debriefed the book and discussed mass incarceration and the prison industrial complex. On Sunday, the students were assigned a final project to take something they learned from the class and create something new with it—transform what they learned, you might say. Some of the final projects included a children’s book addressing mass incarceration, teaching tools and political cartoons.

“Taking this class reinforced for me the importance of understanding the system of mass incarceration as racist,” said Sarah Hofkamp, a junior. “It helped me in understanding it as a justice issue and recognizing that it needs to be addressed. It was brilliant that [Shands Stoltzfus] decided to use ‘The New Jim Crow.’ It’s a book that talks about this really important subject in a way that hasn’t been done before.”

This book, published in 2010, provided the basis for understanding the past implications of this system as well as how this system applies to our society today.

“What I understand now that I didn’t before is that mass incarceration really is the new ‘Jim Crow,’” Hofkamp says. “[The Jim Crow] era provided social control after institutionalized slavery and racism, and mass incarceration is what we’re doing now. It’s just as problematic and controlling. And white people are just as apathetic about it.”

Comparable with this weekend class is the longer May Term class called Inside-Out, taught by Carolyn Schrock-Shenk. The course is taught around the topic of “Justice in Our Lives.” The class is composed of equal parts college students and inmates from Elkhart County Correctional Facility. There are no lectures, and instead the course is an interactive experience based on discussions and projects.

“The whole point of Inside-Out is for people to cross boundaries: to humanize each other,” Schrock-Shenk said. “It requires you to let go of what you are comfortable with and learn about a whole new reality that is really foreign to most of us.”

Originally started in 1997 at Temple University, Inside-Out classes have expanded from one class of 30 students to over 300 classes with over 10,000 students total. The class works to break down the barriers and stereotypes that people have about inmates in order to understand the prison system in the United States.

Eliana Basinger, a sophomore, had the chance to take the Inside-Out May term class last school year. Prior to the class, she had never visited a jail.

“It’s really depressing,” Basinger said, “There are no windows, no plants and about six colors.”

Student reflections from this class demonstrate how powerful the experience can be. While learning and understanding are integral parts of all classes, Inside-Out initiates a deeper learning process that can stick with students long after this class ends.

“I don’t want to say this class will ‘haunt’ me, because that has negative connotations, but I certainly won’t be able to shake this class off any time soon,” a student from a past ‘outside’ student wrote in an anonymous forum for the class. “It’s like sand at a beach that sticks to your shoes and you carry everywhere, sometimes unknowingly. Or reaching into a pocket of an old coat and finding an item you forgot you had. The stories, the laughs, the tears, the pain, the joy, the faces, the love, all of it has seeped into my being. I’ve been changed in a way I have yet to understand and moved in a way I will never forget.”

This change partly stems from the newness of what ‘outside’ students experience. They are introduced to people who are not allowed to meet with families and instead have to use a computer system to talk to family members. They are also not allowed to hug other inmates, and volunteers and lawyers are the only people allowed in.

“It seems like we need to find better ways of dealing with crime,” said Basinger.

Basinger said the inside students in her class were kind to the outside students and were grateful they had come.

“I am surprised by how much my mind has been opened throughout this class,” another ‘inside’ student wrote. “I didn’t realize how different and alike we all are. I am challenged by the ideas we have shared. I want to continue to practice mindfulness in order to broaden my perspective. I am delighted that I had this opportunity to expand my world and my heart.”

Learning and growing together certainly affected the Goshen students, but the entire class benefited from this open discussion.

“[The inmates are seen as] other; they are people who have done wrong. And in many ways, there are still people that think it’s okay to see them as other,” said Schrock-Shenk, “To put ourselves right beside them, and to get to know them as human beings, is a pretty amazing process.”