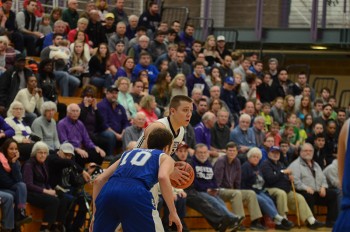 Austin Hayden looks to distribute the ball in a game earlier this season.
Photo by Maria Bischoff

The Goshen men’s basketball team got off to a slow start Tuesday night at Spring Arbor University, but were able to heat up after halftime and earn an 89-79 victory on the road.

The Maple Leafs were able to keep the game close in the first ten minutes, staying within three or four points of the Cougars. A three-pointer at the 9:42 mark sparked a 14-2 run for Spring Arbor, leaving them up 38-25 with less than five minutes left in the first half.

The lead extended up to 40-33 at the half for the Cougars, and they continued that control for the first eight minutes of the second half.

With only 12 minutes remaining in regulation time, Goshen began a 22-2 run and didn’t look back. Christian Grider, a sophomore, had eight points and Austin Hayden, a freshman, added seven points during the run.  Despite a solid effort from the Cougars to stop the clock by fouling in the final minute of the game, the Leafs shot 7-of-10 from the line to ensure the 89-79 victory and pick up their first season sweep this year.

Dominique Bolden, a senior, led the way for the Leafs with 23 points and Grider tallied 22 of his own.  Both players ended just two points shy of their career game highs. Kevin Phillips, a junior, got the job done both in the scoring and rebounding, posting the game’s only double-double with 12 points and 11 boards. Hayden finished with 16 points and Devin Heath-Granger, a sophomore, added 11 points and nine assists, just one shy of his career game high. Trevor Commissaris, a senior, contributed five points as well.

With the win over Spring Arbor the Maple Leafs improve to 13-10 on the season and 5-6 in the Crossroads League, putting them in a two way tie for fourth place with Huntington University.  The Maple Leafs are back in action on Saturday as they return home to take on Mount Vernon Nazarene University in a double header in Gunden Gymnasium, with the women’s contest starting at 1 p.m. and the men following at approximately 3 p.m.