From around the world and back to Goshen 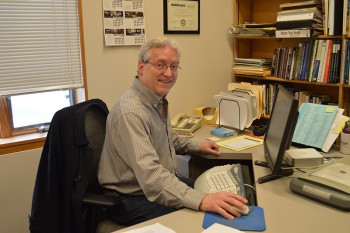 Jon Geiser, Business professor, teaches from a global perspective after operating businesses in Spain and England before settling back to Goshen.
Photo by Maria Bischoff

After getting the itch on SST, Jonathan Geiser bought a one-way ticket to Barcelona, Spain and came back to Goshen 22 years later. Geiser is currently an associate professor of business and the business development director for the Center for Business and Entrepreneurial Education at Goshen College.

When Geiser was a student, he traveled to Honduras for SST and found a love for learning in and about other cultures. At the time, a friend of Geiser’s was living in Barcelona and suggested that he move to Spain for a year after graduation. Geiser was eager to see the world and work on his language from SST, so he did. Once the Spanish schools opened after the summer holiday, he quickly got a job teaching English.

“My one year in Spain turned into six years,” said Geiser. “Barcelona was a good deal. There was great weather and a great lifestyle. The Spaniards really know how to enjoy life.”

That first year, Geiser lived with two other friends before he met his future wife and moved out.

Geiser was a biology major at Goshen; he never saw himself teaching, let alone teaching English. Most of Geiser’s students were business executives, and that’s where he became interested in business. Even though he had not taken any business courses for his undergraduate degree, Geiser decided to go back to the U.S. to get a master’s degree in business.

After two years at Thunderbird, a global business school in Phoenix, Arizona, Geiser returned to Spain and did finance-related work.

During the next six years, Geiser did a number of things like making financial decisions for a Volkswagen production facility outside of Barcelona and eventually starting his own telecom company with two other friends. The friends got the distribution rights to reroute long distance calls. When they closed one of their first big contracts, they went out to celebrate at a restaurant on the French Riviera.

“Champagne in the Mediterranean,” he said. “It was quite the memorable experience.”

At first, the company had some success, but they were up against Telefonica, a monopoly in Spain.

“Legally they had to allow us space on their lines, but they played dirty games, like cutting our phone lines,” said Geiser. “So we moved the business to Atlanta, Georgia.”

While one of the friends went with the business to Atlanta, Geiser stayed in Spain and began teaching finance at a business master’s program. After doing that for a couple of years, Geiser got the itch again.

“I was starting to get tired of the city,” he said. “It was crowded, loud and polluted.”

When the opportunity came to work in the treasury department for a cable company based in Chester, England, he took it.

“I actually lived in Wales, in the hills,” said Geiser. “That’s what really attracted me. If it had been Birmingham or London, I wouldn’t have gone.”

After a few years with the cable company, Geiser heard about Bristol-Myers Squibb’s plan to move all of their back office functions to a location in England. He wanted to make sure he was involved, so he took an entry-level position.

“I didn’t have a job suitable for my experience, but I put my foot in the door,” said Geiser. “I got two promotions in the first year and became the operations director.”

Geiser enjoyed the experiences of learning about international business and problem solving for about six years, but by this point, he had one child and another on the way. He wanted his children to grow up close to their grandparents, so he and his family decided to move back to Goshen.

“Once you live overseas, you never quite view the world the same way, or your culture,” said Geiser.  “You see that there are different ways of doing things. They’re not right or wrong; they’re just different.”

Geiser picked up a number of cultural pieces from his time living in Europe. He has been able to maintain “many of the Spanish traditions,” like cooking Spanish dishes. He also says that a lot of his language consists of words from the UK.

“Sometimes I’m talking, and I get a blank face,” he said. “And I realize, oh, that’s a British-ism.”

He recommends that his students spend a year abroad if they get the chance.

“It’s an eye opening experience,” said Geiser. “You open your perspectives of how people relate to each other.”

But Geiser emphasized the distinction between being a tourist and really living your life abroad abroad.

“You can’t just go home, so you have to solve your problems,” he said. “You have to decide if you’re going to integrate or not.”

With years of experience in different countries and cultures, Geiser has a great depth of knowledge for students to tap into if they are considering going abroad.

“The key to surviving overseas is to focus on the good things,” he said. “Don’t put so much importance on the things that aren’t so good.”