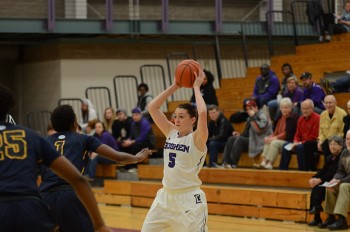 It was a big day for Cliff Alexander as he stepped out onto the hardwood floor of Warner Cable Arena in Charlotte, North Carolina and logged a career high 17 minutes, with four points and four rebounds.

No idea who Cliff Alexander is? Well, that makes two of us.

Alexander signed to play for the Portland Trail Blazers in 2015 after his freshman year at Kansas University. In his rookie season Alexander is paid $525,093, the lowest salary in the NBA.

That $525,093 is chump change in comparison to the $25 million superstars like LeBron James and Kobe Bryant bring in on salary alone.

However, that chump change is five times more than the highest paid woman in the WNBA.

As a collegiate basketball player and a woman, I grew up idolizing veterans of the game like Lisa Leslie, Candace Parker, Tamika Catchings, and Diana Taurasi. All are powerful women, whose accomplishments demand respect.

These women have all been in the league anywhere from eight to twelve seasons. Each has been named MVP. All have had their hands on an Olympic gold medal.

Yet, the maximum salary for a woman in the WNBA is $107,000. $107,000? That can’t be right, I must have missed a zero. There’s no way a 20-year-old rookie who rarely comes off the bench can be making five times the salary of the women I’ve dreamt about becoming since I was a child, is there?

As hard as it is for me to believe, that’s the reality of the world we live in. The 66-year-old NBA has TV time and revenues that seem so elusive to the teams of the 16-year-old WNBA that make those salary allowances feasible.

All WNBA teams wear uniforms that essentially make them walking, running, and jumping billboards. Whether it’s Finish Line, Boost Mobile, or Farmers’ Insurance the names of companies are emboldened across the chests of these athletes, as almost to shout “we need money!” You would never catch LeBron James dead in a uniform covered with advertisements, unless of course they were coupled with a lucrative endorsement deal.

Most women play professionally overseas in addition to their WNBA season to supplement their income. Teams abroad pay their elite athletes up to five times what they make here. Brittney Griner, a first round draft pick in 2013, was paid $600,000 in 2014 by the Zhejiang Golden Bulls, according to ESPN the Magazine.

The WNBA season is just 5 months long, so the majority of their playing time is spent overseas. They’re staying longer and making more money playing overseas, which begs the question: does the WNBA become their “offseason”?

One stand-out is beginning to answer that question for us all. Diana Taurasi plays for the Phoenix Mercury and is arguably the greatest to ever play the game, though that’s an entire discussion of its own.

Taurasi was paid $1.5 million (15 times her U.S. salary) by UMMC Ekaterinburg, her Russian professional team, under one condition: she sits out the entire 2015 WNBA season. A $1.5 million dollar check to take a much needed five-month break? Seems like a no brainer, and for Taurasi it was.

“The year-round nature of women’s basketball takes its toll, and the financial opportunity with my team in Russia would have been irresponsible to turn down. They offered to pay me to rest and I’ve decided to take them up on it. I want to be able to take care of myself and my family when I am done playing,” said Taurasi in a letter to Mercury fans.

With a tough competitor out for the year you would think others around the league would rejoice in knowing they wouldn’t have to face Taurasi. You would be wrong.

“Playing against Diana is honestly a privilege,” said Candace Wiggins, of the New York Liberty. “And I really, really hope that she comes back to the league next year,” according to the Player’s Tribune.

Many competitors support Taurasi’s decision and even think it could lead to positive change.

According to News Day, Sue Bird, a 12-year WNBA vet said, “I think if anything, it’s going to help the league in the long run. Something like this could really kind of turn us in the right direction and I think it’s a good thing. It points out some issues and makes people aware of some things, and maybe some good things will change from here.”

Fans of the WNBA are fearful of its future, fearful that more players will sit out or leave the WNBA entirely in search of a wage that is reflective of their performance. But not everyone is up in arms about the obvious wage gap. Former Indiana Fever head coach Lin Dunn says a comparison between the 16-year-old WNBA and the 66- year-old NBA is inappropriate, according to USA Today.

“You have to look at how we’re growing our game and where we are in the growth of our game and not get caught up in that,” said Dunn.

Though many things between the two leagues are different: the length of the season, the amount of games broadcasted on TV, and the overall attendance, the only physical difference between players like Taurasi, Catchings, and Leslie and the NBA players is an extra chromosome.