One for the record books 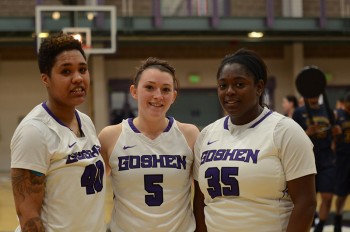 Seniors Jo’Mani Thomas, Liz Tecca and Tyra Carver have all reached 1000 points in their careers.
Photo by Maria Bischoff

The Maple Leafs have claimed 17 spots in top 10 career statistical lists. Jo’Mani Thomas, a senior, leads the team with six appearances across the book. She is fourth in GC women’s basketball history for rebounds, with 716, sixth in free throw attempts at 303-of-404, and eighth in field goal attempts and makes, going 435-of-1042.  She also has 1192 career points.

Liz Tecca, a fellow senior, finds herself in the top 10 for five statistics, all offense-oriented. She is first in career 3-point attempts with 649, and third for makes at 192. She also claims third in career field goal attempts with 1150, and eighth from the free throw stripe at Tecca’s 77.7 percent. Her fifth claim to fame comes in the career point column, where Tecca sits in ninth place after accumulating 1157 points so far, with 10 regular season contests remaining.

“It’s important to me because it means I’ve been able to help the team” Tecca said. “Especially with the team’s situation when I came in, we needed production to get us going.”

When asked about the team as a whole, Tecca again mentioned the program’s situation when her class came to Goshen College as freshman.

“I think that’s the reason we’ve been able to get where we are, when we’re playing together for so long. I’ve loved playing with Tyra and Jo’Mani, and then adding Sophie and Keshia in the following years, it’s great being surrounded by extremely talented women, that make me a better teammate and person as well.”

Tyra Carver, a senior, didn’t want to miss out on all the fun, and has worked her way into the record book three times, with two other stats sitting just out of range at 11th. Carver’s 34 percent from behind the 3-point arc is seventh best all-time, and her 433 career field goals put her at ninth. Lastly, Carver joins Thomas in the top 10 in free throw attempts, having taken 302 shots from the charity stripe.

“I appreciate the path that we’ve taken to get here,” Carver said. “It goes to show how well we work together as a team. For most programs you’ll see maybe one or two players in record books, but being able to have five players in ours is really cool. We have this motto; if one eats then we all eat. We work together as a unit to get the job done.”

Keshia Ward joined the team for her junior and senior seasons. Racking up quantitative stats can be difficult in just two seasons: however qualitatively Ward in shooting 49.7 percent in her career, landing her sixth overall.

“It’s surprising and weird, coming here for only two years and actually having an impact in women’s basketball, it’s really cool” Ward said. She also commented on the team’s overall success; “It’s nice to be a part of a team that has such great players, where we are all being recognized. It’s nice to know that they are being rewarded for all the hard work they put in. “

The last two of the 17 records belong to junior Sophia Sears. Sears sits atop Maple Leaf history with a career mark of 85.6 percent from the foul line. This season alone she is shooting 94 percent from the charity stripe. She also has 274 career assists, sixth all-time.

“It’s nice, but I think that all of our overall focus in on our team goals, like focusing on winning a game at a time” Sears said.

“Ultimately my job for the team is to set the table for everyone else, and assists are just how I do that.”

Stephanie Miller, head coach for the Maple Leafs, is very proud of her players’ accomplishments.

“It’s probably the most important thing I’ve ever achieved as a coach. Clearly we still have work to do, but the general concept of making good on a promise is something that I can’t explain the importance of for both my players and myself.”

*All statistics are up to date through last Saturday’s game versus Marian University.