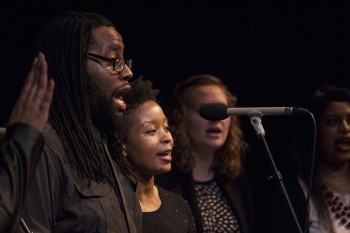 The slogan for this year’s theme was “Trouble I’ve Seen: Naming the Nightmare, Re-imagining the Dream.” The celebration filled the weekend with a wide spread of activities for students and community members alike.

The weekend began with a few guests including Sofia Samatar, a Goshen College graduate of 1994 and world-renowned science fiction writer.

On Saturday, Samatar gave a public reading that featured excerpts from her novel “A Stranger in Olondria,” another excerpt from the upcoming sequel, a short story titled “How I Met the Ghoul,” and a poem titled “Girl Hours.”

Sunday morning, Drew Hart, a PhD candidate in theology and ethics, spoke at College Mennonite Church during a worship service.

On Sunday evening, Voices-n-Harmony, GC’s gospel choir, hosted special guests at the concert, including members of a church choir from South Bend. This concert was followed by a dessert reception in Umble where students were able to engage in discussion.

The events continued early Monday morning with a community breakfast in the Church-Chapel Fellowship Hall. At the breakfast, Samatar gave a brief presentation on “Broken Glass and Living Otherwise.”

Following the breakfast was the Spoken Word Coffee House, which included readings from Goshen College students.

Alma Carillo, a junior, read a piece on how the scars of the past shape the present. At the end of her reading, she challenged the audience to make a difference and to persevere even if it seems as though the rest of society is on standby.

Malcolm Stovall, a junior, read a piece by Malcolm X called “Between the World and Me,” which is about identity. He also touched on his perspective of identity and race.

Gabby Williams, a junior, read her poem on the challenges of gender, race and equality titled “What if I am a Black Woman?”

Nathan Orr, a junior, shared a story about forgiveness, and he also concluded by making a statement that in order to move forward in this age, there is more power in forgiveness than resentment.

“Being able to share such a special story on Martin Luther King Day was an honor to me,” he said. “Nothing but gratitude comes to my mind when I think about sharing a valuable lesson about forgiving others.”

After the Coffee House, guests were invited to make their way to the Church-Chapel to attend convocation, led by guest speaker Drew Hart.

Hart touched on a few point throughout his presentation, some of which included his views on white supremacy. He mentioned and briefly spoke about an optimistic dream of segregating culture known as a “heroic redemption.”

Hart noted during his speech that there is truly one race—the human race—but he was also clear that race is a social reality, and so the effects of racism are real and still occurring.

On Monday afternoon, Samatar led a workshop titled “Regeneration: Imagining Black Futures,” where she discussed Afrofuturism, a genre in the arts that speculates on what future African cultures might look like.

The final event of the weekend was the “Town Hall Meeting: GC Campus Climate,” a talk-back session led by Goshen College staff members and students.