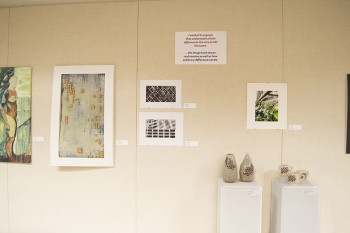 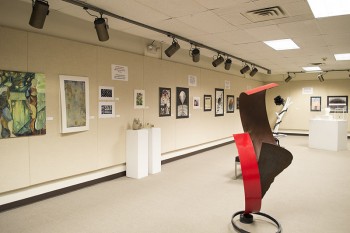 The North and South student art exhibit will remain in the Good Library Basement Gallery until March 16.
Photo by Maria Bischoff

Over the course of the fall semester, 39 Goshen College students explored the theme “North and South” in a variety of art classes. The products of this exploration are on display in the basement of the Good Library. Exploring ideas of polarization, the exhibit features 55 student works including watercolor paintings, pencil and charcoal drawings, mixed media collage, ceramics and sculpture.

During the first convocation of the spring semester, members of the GC community heard from several of the student artists, including Anya Slabaugh, a junior art major. Slabaugh, who has several pieces in the exhibit, shared some of her thoughts about the theme.

She observed that “as humans we are very content with dichotomies, and categorizing things into boxes. We really only stop to examine these oversimplifications when we are inspired or forced to.”

One of Slabaugh’s works is large sculpture located in the library entrance. The work, which resembles a cage, is a result of Slabaugh “trying to conceptualize what it feels like to struggle with depression.” In particular, she considered ways that depression affects one’s sense of direction and perspective.

Randy Horst, professor of art who taught the fall drawing and watercolor classes, was part of the group of art faculty who chose the theme North and South.

Horst points out that “we live in a polarized world where it’s popular and easy to simplify life’s experiences into opposites,” and says that the faculty wanted students to explore one of the roles of the arts: “to show us how living with and embracing contradictions is possible.”

Because Horst and the other art department faculty emphasized the freedom that students had to interpret the theme based on their own experiences and interests, students went in many directions with the idea of polarization.

Horst was very pleased with this variety and commented that “some pieces were funny, some were very serious and some were very inventive.” He also noted that this year’s exhibit has more variety in scale than has been present in the past, due in particular to several large sculptures.

Courtney Wengerd, a junior, created a charcoal drawing featuring two hands, used to represent “the economic differences between the north and south in the United States before the Civil War.”

Juliana Alves de Silva, a senior, created a collage exploring themes related to the differences between north and south in her home country, Brazil.

Emma Koop Liechty, a junior, also chose to consider the role of north and south in her own life, creating an abstracted watercolor piece featuring the migration of a goose from Canada to the US, reflecting her own dual-citizenship between the two countries.

This is the sixth year of student art exhibits in the library gallery. Last year’s theme was Tolerance and the Other, and next year, art students will take up the theme Lion and Lamb. The North and South exhibit is open during regular library hours.