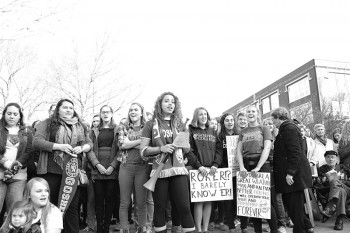 As a senior at Goshen College, I’ve realized there is a sixth core value to go along with the “Five Core Values” on campus—obligatory activism.

While these are important causes, and I don’t doubt that Goshen College students care genuinely about them, sometimes this activism seems to lose sight of the larger picture.

For example, on September 30, a group of GC students and staff held a candlelight vigil for Kelly Renee Gissendaner, the first woman put to death in Georgia in 70 years.

In 1997, Gissendaner and her lover made a plan to kill her husband, resulting in her lover stabbing her husband to death.

Her execution sparked a national and international debate, not only because of the use of the death penalty, but also because she didn’t physically commit the act of murder.

This story garnered so much attention, Pope Francis even pleaded for her life. Ultimately, Gissendaner was put to death.

I understand why students would be upset. The death penalty and legal system is often doesn’t seem to make much sense.

I also understand that one of the original five core values is compassionate peacemaking and all lives are considered precious.

However, the next day, October 1, a gunman killed nine people at Umpqua Community College in Roseburg, Oregon.

There was no candlelight vigil, no singing of “This Little Light of Mine,” no organized event to remember the nine innocent lives lost at the hand of gun violence, an issue about which many Goshen students also feel passionately.

Not only were more people killed by a fellow student, these victims, as students, could be considered peers.

I called a friend who graduated from GC in outrage, asking him questions as to why college students wouldn’t stand with peers shot in cold blood, but they would stand with a 47-year-old woman convicted of murder. I wondered where their priorities lay.

He didn’t have any answer for me, but he listened to my frustrations.

He also listened to my frustrations when weatherman Al Roker came to campus.

Roker came to campus as part of his “Rokerthon 2” series to break the Guinness World Record for reporting the weather in all 50 states in one week.

I even had my great aunt in North Carolina excited he was coming to my campus. This was a big deal.

While waiting for Roker to fly into Goshen and report the weather from the Adelphian Fountain, I noticed signs from community members I would typically see on the TODAY Show: “Welcome Al to Goshen,” “Goshen is my happy place,” and my personal favorite, a yellow paper plate saying, “Goshen is the best town under the sun.”

Signs read “Free Palestine,” “#BlackLivesMatter” and “I stand with Planned Parenthood.” Other signs included messages in favor of gun control and against sexual assault on campus.

I kept asking myself, “Do these people know he’s a weatherman and not the president?” Not even a meteorologist—just a weatherman.

I was embarrassed to be among my fellow classmates who didn’t see this as a fun opportunity to just be on national TV.

Instead, they saw a friendly visit from a man trying to break a world record as a way to push political agendas where they didn’t need to be pushed.

Sometimes on campus I feel I’m the only one with a dissenting opinion or differing view than the majority. However, I know others feel the same way, but they’re afraid to speak.

If you’re going to practice Goshen College’s sixth core value of obligatory activism, make sure it’s done appropriately, at the right time, and for the right causes—not just to make a scene.

It’s hard to get your voice heard on a campus where there are already so many loud voices speaking for so many causes.

There’s value in silence as well.