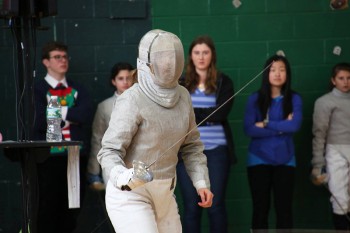 Anja Kenagy, a first-year, has been fencing for four years and has competed both in the summer national tournament and the Junior Olympics.
Photo contributed by Anja Kenagy.

Anja Kenagy may be the only student at Goshen College that had to decide whether or not to pack her swords. Kenagy is a first year student from New York, and a fencer.

Kenagy has been fencing for four years, since she was a freshman in high school. “I was looking for a sport to do in high school, and I was basing it off who was in it,” she said. “I had made friends in art class who had been fencing on the side, so I decided to join [fencing] with them.”

She said she enjoys fencing because “it’s a physical workout but also mental, because you have to be strategic.”

Kenagy fenced both with her high school, Half Hollow Hills, and in a club, H3 Fencing Institute in Dix Hills, New York.

In fencing, there are three swords: the saber, foil and the epee. Each sword is about two and a half feet long. The saber has a bell handle that gives protection to the hand. Foil and epee swords both have French grips, which is a different style than the saber.

A foil bends easily, while the epee is harder to bend. Both the foil and epee have a button at the tip of the sword that is connected to wire along the blade. That wire is connected to a body cord, which is connected to a floor cord, and that notifies the scoring machine when a fencer has scored.

Fencers often have one sword they are drawn to. Kenagy said her preferred weapon was the saber. “It’s the best one,” she said. She described saber fencing as “kind of like cavalry. It’s all about reaction time.” Epee fencing is “more like jousting,” while foil fencing she described as “etiquette fighting.”

All the schools play every other school twice. There is a county tournament held where all the schools play each other once, and the teams with the most matches win the tournament. Unlike other sports, fencing in schools do not have brackets to determine which school is better and there is no one definite school that wins.

Since coming to Goshen, Kenagy has stopped fencing. “I’ve worked on footing, but I didn’t bring my equipment,” said Kenagy. She doesn’t plan on bringing her equipment unless a club is formed. She said she does not know of any students who fence, but does know that Jo-Ann Brant, professor of Bible, religion and philosophy, did some fencing at one point.

Kenagy owns all her own equipment, which costs quite a bit. A beginner pays about $417 for the equipment and only one weapon. Equipment includes the outfit a fencer must wear which includes a mask, a glove for the hand used to fence, and a lame, a metal-threaded shirt that is conductive which is used only in saber and foil fencing.

Fencing is not often found in high schools. “New York has three counties that have [high school] leagues, and New Jersey has a few,” she said. Most other states fence through clubs. The state of Indiana has eight fencing clubs while New York has 46 different clubs, according to the USA fencing website.

When she first started fencing, Kenagy said it was not a natural fit. “What made me stay was that the practices were so hard but I was still motivated,” she said. “Once I got into it it felt like a good fit.”

When Kenagy tells people she fences, she said the usual reaction is “That’s so cool!” Often someone will quote a movie that involves fencing, like “The Princess Bride” or “Parent Trap.”

“It’s painful to watch [fencing in movies] because it’s so wrong,” said Kenagy. “They’re too theatrical. They do a lot of spinning around and using two hands and both of those things are a big no-no. Turning means your head is exposed, which is idiotic and dangerous. And you never use two hands.”