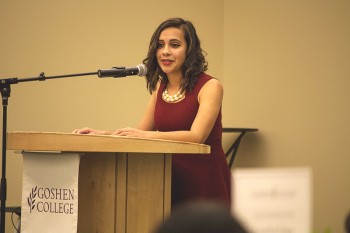 Janeth Vela, a junior, was one of the students invited to speak at the dinner.
Photo by Hannah Sauder.

The goal of the dinner was to raise $50,000 for Latino students, and were able to come up very close to that goal, with around 160 people attending. Attendees included students, faculty and members of the greater Goshen-Elkhart community.

The event also had a large number of speakers, including President James Brenneman; Janeth Vela, a junior; Rebecca Espinoza Kubacki, a former state representative; Edgar Saucedo-Davila, a GC alum; Alexa Valdez, a junior; Toby Faustino, a senior; and Isaac Torres, the founder and president of InterCambio Express in Elkhart.

The dinner was also filled with music, by Lalo Cura. But, as people began to leave, a mariachi band from Fort Wayne marched into the hall.

President Brenneman spoke on behalf of the college faculty about how Goshen College has worked intensively to be more welcoming to Latino students and students of color.

So far, 40 percent of the class of 2019 is made up of students of color. “The real reason I feel a need to brag about these outcomes,” said Brenneman, “is to battle against the stereotypical prejudice that to be so welcoming to first-generation students, like me and so many others at Goshen College necessarily means a lowering of our educational expectations and outcomes.”

Valdez, who spoke at the event, was pleased with how the dinner turned out.

“Richard Aguirre [who organized the event] did a very good job of picking speakers that come from different backgrounds but talked about similar goals, which were completing their college degree, and seeing other Latinos do the same with the help of the donors who attended last night,” she said. “I appreciated seeing so many people, including GC alums, coming and supporting the cause that we were promoting.”

Aguirre said, “This event was a milestone for Goshen College and for the Latino community of Elkhart County. It was the inaugural Latino Scholarship Dinner and the first major fundraiser for Latino college students in Elkhart County.”

In a time when US politics are dominated by racism and oppression, Aguirre said that the dinner and the sentiments it implied gave him hope.

“The Elkhart County community gathered and delivered a positive message of hope in the promise of our Latino students,” he said. “In turn, our outstanding Latino students and alumni showed that they deserve the community’s support because they increasingly will be leaders in business, education, healthcare, social services and much more in Elkhart County. I am proud of them and what we can accomplish as a community when the focus is on helping all students reach their full potential.”