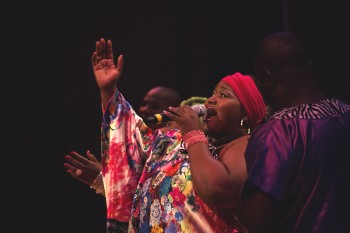 The highly acclaimed, Grammy award-winning Soweto Gospel Choir took the stage on Sunday as part of the 2015-2016 Performing Arts Series.

The group is a choir from the Soweto Township, a part of Johannesburg, South Africa.

Their performance included gospel songs in several native South African languages as well as English. The turnout for the concert was significant, with the majority of the hall filled.

The choir was not unfamiliar with the Sauder Hall stage as they had given a concert for the Performing Arts Series at Goshen College in 2007.

The concert included upbeat African drumming in all of their songs, whether they were traditional South African pieces or their versions of American pop songs and spirituals.

They used two djembe drums throughout the night and added in the occasional use of a keyboard. The performers, all 17 of them, were dressed in bright, traditional clothing, and danced along to every song.

The concert started with an alto soloist as the rest of the choir brought a powerful presence behind her.

A notable piece that the group sang in the first act was the song “Asimbonanga,” a piece written by South African Johnny Clegg as a protest song for South Africans.

The piece was based on the inspiration that former President Nelson Mandela brought to the country. The Goshen College Women’s World Music Choir performed this same song for the Earthtones spring concert in 2014, and used a video of the Soweto Gospel Choir as inspiration for their performance.

The second half of the show brought more South African gospel songs, but also featured the group’s take on some songs that the audience was familiar with. James Brown’s “I Feel Good,” Sarah McLachlan’s “Arms of an Angel” and spirituals “This Little Light of Mine,” and “Kumbaya,” were all featured after the intermission.

The second half of the show featured a gumboot dance that was performed by four of the choir members.

Gumboot dancing is native to South Africa, and the dancers wear rubber rain boots, or gumboots, and slap the sides of the boots to create unique rhythms.

Sarah Hartman-Keiser, a sophomore who attended the concert found the dance familiar. “It was cool recognizing the gumboot dance from when I had visited the Soweto Township in 2012,” she said. The Hartman-Keiser family lived in South Africa for six months.

The largest reaction from the audience came near the end of the performance when the choir encouraged the crowd to join in singing. The last song had the audience on their feet, clapping, swaying, singing and dancing along.

The next PAS concert, “A Christmas Gathering: Féile na Nollag” by Danú, is on Tuesday, December 8 at 7:30 p.m.