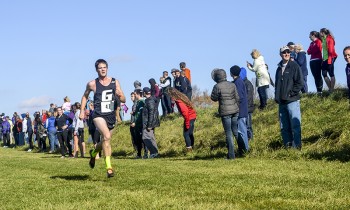 Both the men’s and the women’s cross country teams concluded their seasons in Huntington, IN, on Saturday at the Crossroads League Championship meet. The women finished 10th with 266 points and the men finished fifth with 126 points.

Alejandro Rodriguez, a senior, and Ryan Smith, a junior, both left the meet with a chance to qualify for the national level. Smith has an almost-guaranteed slot in nationals with his seventh-place (26:05.35) finish. Rodriguez (26:35.98) finished 14th, and both earned all-conference honors by finishing in the top 15 slots.

Hannah Barg, a senior, led the Goshen women with a 20:50.13 time for a 57th overall finish. Fellow senior Natalie Graber finished eight places behind Barg with a time of 21:11.31. Katie Yoder ran a career-best 24:26.70 in the final race of her freshman year. Also posting a personal record was Trevor Yoder, a first-year, with a time of 28:59.41.

Reflecting on the final meet, Coach Rustin Nyce was generally pleased. “The athletes, for the most part, raced their best race of the season at conference. The men rebounded from an off performance at Great Lakes. We ran very close to Bethel, who is ranked 25th nationally. The women’s success is not defined by team place but by the perseverance this group showed all season long. I am going to miss the senior leadership, especially on the women’s side,” he said.

Nyce also added that because of the many hills, the course was a difficult one to run, but was pleased with how the teams handled it. “I wanted the runners to focus on attacking the course and being aggressive. I certainly think they did just that. We ran this course earlier. They still were much faster as a team this time than the last time,” he said.

Nyce was particularly proud of the seniors’ efforts. “The seniors had a great day.  Alejandro ran the gutsiest race of his life to finish all conference, and likely qualify for Nationals, and Lucas Harnish sacrificed himself for the team—again. Hannah Barg and Natalie Graber led the women all year and set the tone yet again. Irene Schmid and Grace Boehm ran strong as well. Katie Yoder had a particularly strong race, knocking off about two minutes from her lifetime best.”

Graber described finishing her last race as “bittersweet,” but she will cherish the relationships she has built through the sport. “My teammates are some of the most supportive and encouraging people you will ever meet. They are really what makes cross country all worth it,” she said.

Rodriguez agreed. “Even though it saddens me that I will not be running for Goshen College cross country anymore, I will always remember this group of runners,” he said. “They have shown me that no individual is able to support themselves; a [true] team is when an individual puts the team before themselves.”

Harnish said that he will always remember this year’s team as “a rag-tag group of goofy guys who were brought together with the common love of running ourselves into the ground.”

“After NAIA nationals, I plan to keep running road races individually and would love to run relay road races with a team,” Rodriguez said.

After track, Harnish said that he will “most likely be going overseas as part of the SALT program. And someday I’d like to run an iron-man triathlon.”