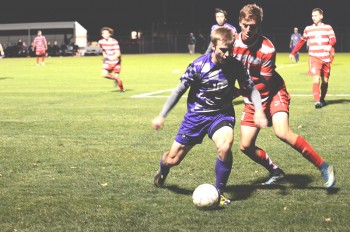 On Saturday, October 31, the men’s soccer team traveled to Marion to take on Indiana Wesleyan in the first round of the Crossroad’s League tournament.

Though the Leafs were the underdogs on paper (ranked 8th in the conference to IWU’s 1st), Aaron Patrick, head coach, was optimistic entering play.

“Last year we went to IWU and I pretty much knew it would take a miracle to get a win, they were simply just better than us all over the pitch. This year I left feeling like we were very evenly matched and just a little bit of luck on their part made the difference” he said.

Unfortunately, goals by IWU in the 29th and 67th minutes propelled the Wildcats to a 2-0 victory. Goshen had their best chance to answer directly after IWU’s first goal as Isaac Huerta, a first-year, beat his man and crossed to Chris Venderly, a senior, whose shot from the right of the box ricocheted off the right post.

Good looks were hard to come by after that for Goshen as the Wildcat defense only allowed six shots in the game, with one being on goal. IWU added an insurance goal when Eddie Hernandez shot from 30 yards out. Dean Nafziger, senior keeper for the Leafs, slipped slightly on the wet turf, and it was enough to let the ball enter the goal.

Goshen didn’t quit, however, as Huerta came close late in the second half to cutting the deficit to one, but his shot missed wide of the post. Nate Nussbaum, a first-year, led Goshen with three shots in the game.

This marked the end to the 2015 campaign for the men’s soccer team.

As for next year, Coach Patrick is excited about what is in store for the 2016 squad. “If there was a percentage on which teams in the conference improved the most from 2014-2015 I truly believe that we are top of that list,” he said. “This year we played the toughest non-conference schedule that Goshen has played arguably ever. In all of those games we competed well and actually played some good soccer…This year was all about preparation for the next 2 years.”

“Looking forward to next year, I finally feel like I will have a full squad of players that can compete at the top of the conference,” Patrick said. “This year we had too many injuries and not a deep enough squad to cope at times, but when we had most of the guys, we were very, very good. The motivated group coming back already wants to start training and that tells [me] that we have a good shot at a great couple of years.”