Ignition Underground reaches out to students 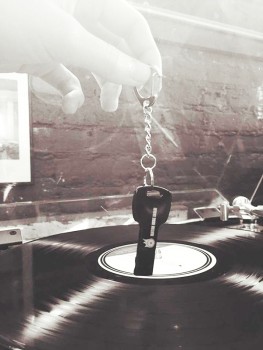 However, the $20 per seat price point puts Ignition’s concerts out of reach for many college students. Ignition is working to change that through a movement called Ignition Underground.

“Ignition Underground is for GC students to have access to concerts at Ignition Music Garage with perks,” said Maria Bischoff, a senior and an intern at Ignition Garage.

Several key-shaped flash drives filled with music were distributed to students and placed around GC’s campus.

“All students receive discounted ticket prices to every concert and they have access to a VIP seating area when they bring in the flash drive key on the day of a concert,” said Bischoff.

The flash drive key gets passed around amongst students, with those at Ignition not knowing who or where the new owner is. Ignition originally handed out these flash drives at the beginning of this past school year, officially launching Ignition Underground. The flash drives are a way to share music between students and double as a VIP ticket to shows.

“The purpose is to get people going to Ignition,” Bischoff said. “To see it as a cool place to hang out and to try and get the artists that the students want to see in concert here in Goshen.”

Looking around Ignition demonstrates the hang out vibe, with the exposed brick and high ceilings enclosing a space with a laid-back feel with plenty of listening spaces and even more music selection.

Ignition also runs the promotion for Goshen College students to purchase tickets for $10, further enticing students to check out the many voices that come to Ignition.

The hope is that students will get hooked on the live music and great atmosphere enough to come back for other events that they host, like special First Friday events and election watch parties.

Ignition touts their mission as being “dedicated to presenting music the way artists intended it to be heard; recorded, live and broadcast.”

This dedication to music has been transformed to include art and food, with concerts featuring local companies and this coming First Friday on November 6 featuring Allison Pannell, a local fiber and jewelry artist.

The space that is now Ignition Garage lives up to its name—it was previously an auto repair shop, and just before 2012 Ignition Garage opened its newly renovated doors as a spot for Goshenites to buy and listen to music.

The next concert will feature The Bros. Landreth and The Ballroom Thieves on November 11 at 7:30, with tickets on sale now through Ignition Garage.