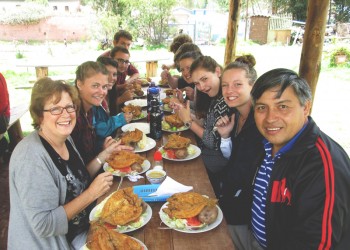 Wilfred Villavicencio with the Peru SST group from the spring of 2015.
Photo contributed by Duane Stoltzfus.

During his visit, he spent time reconnecting with past SSTers and their leaders, exploring the area as it was his first time in the U.S., and giving a convocation this past Monday about his experience working with Goshen College students.

“My goal is to understand the culture and the life here on campus,” said Villavicencio. “I work in Peru for students and I know my country, but I want to learn more about [Goshen].”

Before his work with SST, Villavicencio guided medical mission teams. He heard about the job through a church connection, and has worked with Goshen College SST leaders since 2009. He also has a strong network of contacts around the country. By drawing on both these contacts, he is able to find both service placements and host families for Goshen students in Peru.

“I like how the students get to work in many different areas of the country,” said Villavicencio. “I thank God that I found Goshen to work and to have the opportunity to serve my country.”

Villavicencio grew up in poverty in a tiny Andean village, came to Lima when he was 12 years old to make his way in the world and eventually became a pharmacist and now a cultural guide because of “his intelligence, determination and hard work,” according to Aguirre.

When Villavicencio came to Lima as a child, he experienced the discrimination of Andean people first-hand, and still feels the effects of it today.

“My wife is now working as a housemaid,” said Villavicencio, “and at lunchtime the owners of the house eat lunch in the fancy area together. She must wait to eat until after the owners eat, and she can only eat in the back of the kitchen.”

“One of the highlights of [this past] year,” said Duane Stoltzfus, professor of communications who has spent two one-year stints as SST leader with his wife Karen, in Peru, “was traveling to the little town of Vito in the Andes where Willy grew up. As Willy says, the town of Vito is humble and remote and also home to some of the most welcoming and generous people in Peru.”

Claire Fredrick, a junior who spent this past summer on SST in Peru, experienced Villavicencio’s welcoming qualities personally.

“During my time on SST he showed us amazingly gracious hospitality,” said Fredrick. “So when I heard he was coming to Goshen, I was excited but also nervous; I wasn’t sure we’d be able to show him the same amount of hospitality he showed us every day in his country.”

For the first time, this past summer, two Goshen students, Hayley Mann and Phil Longenecker, juniors, went to Vito for service.

“Willy is such a talented person,” said Longenecker. “He speaks three languages: English, Spanish and Quechua. Without his help and coordination, not only my service portion, but everybody’s service portion wouldn’t have been as successful as they were.”

Longenecker took Villavicenio’s visit as a chance to reflect on his time spent in Vito.

“He’s told me multiple times how proud he was that Goshen students finally made it to Vito, and I was happy to be a part of that,” said Longenecker. “His visit has definitely been an emotional and thought-provoking time for me; I think it’s a unique SST experience to visit a remote village in Peru, then have a person from there visit your home in the states.”

“It’s hard to calculate the odds of people from Vito and people from Goshen ever crossing paths again, but a long time is a safe bet,” said Stoltzfus. “Time and again, SST has made unexpected connections like this possible, reminding us that, as Paul Farmer says, humanity is the only real nation.”