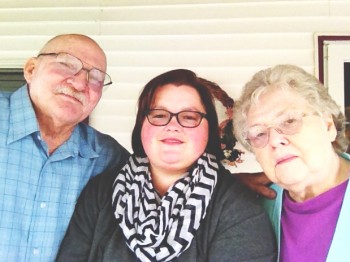 Kelly Poff and her grandparents, whose home is in Appalachian West Virginia was a large part of Poff’s childhood.
Photo contributed by Kelly Poff.

If you were to perform a Google search of what lies in West Virginia, you might find such gems as world famous luxury at the Greenbrier Resort, magnificent historical mansions in Bramwell, the Kirkwood winery, white water rafting, or the hot springs in Berkeley Springs. My heritage lies in none of these places, but in one of the poorest counties in West Virginia.

In the southern tip of West Virginia, nestled in the Appalachian Mountains, you would find McDowell County. It was previously sustained by its coal mining, at least until the industrialization of coal mining came through as well as the increased use of oil, which then put more than 1200+ hardworking men out of a job, and eventually families out of their homes.

This is where my grandparents were born, specifically in what is known as “Big Jenny Holler” near Davy, West Virginia: where you respected your elders, you had a healthy fear of God beaten into you by the local Southern Baptist Church (or your mother on occasion), every member of the family did their fair (and sometimes unfair) share of the household duties, where money was so scarce you grew what you could in the garden in order to eat, lived on cornbread and soup beans when there was nothing else to feed the many children sitting around the dinner table, or you dropped out of school because you were tired of not having the basic supplies you needed, such as paper, pencils, or even shoes.

This was my grandparents’ life: a much different picture than the one painted by the West Virginia Board of Tourism.

There were, however, many good qualities passed down to me from this culture. My grandparents taught me to be thankful for every blessing and financial provision, to never say I “hate” something because God doesn’t like that, to respect my mother because “she’s the only mother you’re ever gonna have,” to call out every “lie from the pits o’ hell,” that family should be held as most important, even above myself, to always look my best whenever I leave the house (they will still call out every flaw), and that the head of the household should be fed first.

My grandmother said the moment she knew that my grandfather had worn her down was the day he told her he was going to shoot a squirrel outside through the window, and the only thing she said was “well, take the screen off first.” On a side note, my grandfather now feeds the squirrels peanuts by hand from his front porch instead of trying to shoot them.

My grandparents and their West Virginia relatives have also given me a love for Southern hospitality and Southern food. Fried chicken, fried potatoes, cornbread, pinto beans or “soup beans,” biscuits with homemade sausage gravy, collard greens with vinegar and bacon grease, and many other tasty, but very unhealthy morsels.

I always love when we are able to travel to West Virginia to visit, not only to see the beautiful mountains, state parks, and visit wonderful family, but also because regardless of whether we’ve eaten or not they will still insist on feeding us, and with the sweetest and thickest Southern accent you can imagine, how can we resist? My husband says that I pick up my grandma’s “Southern drawl,” while I don’t even notice that she has one anymore. The accent is what I seem to absorb the most when I am exposed to it.

As for communication, my family’s “Appalachian” heritage has taught me to speak my mind, to “call a duck a duck” while attempting to remain respectful, and to uphold myself with as much grace as is within my ability. I believe that this type of communication and attitude has helped me express my personality on campus, despite my tendency toward introversion, to have the utmost respect for my professors as authority figures, to respect myself enough to stand up for what I believe in, and to achieve what I know I am capable of, despite being far outside my comfort zone.

While I hope I have refined my vocabulary and tact over the last few years while attending Goshen College, I know that all the character qualities and communication skills instilled in me by my “hillbilly” heritage and “Appalachian” culture will remain in me for as long as I live.