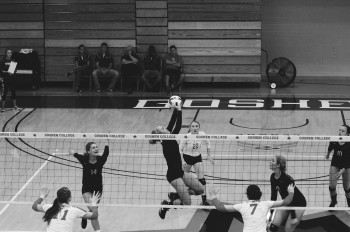 The women’s volleyball team recognized several of their professors at Prof Night on Wednesday.
Photo by Maria Bischoff.

The Goshen College volleyball team defeated the University of Saint Francis on Wednesday, October 21 in their longest match of the season, with some of the players’ most influential professors present to cheer them on. The Leafs defeated the Cougars for the second time this season in five sets (22-25, 26-24, 35-37, 25-15, 15-5).

For GCVB’s second annual Prof Night, most players on the team honored one or two of their professors at the start of the match. Head coach Jim Routhier announced all of the professors in attendance, their department, and which volleyball players invited them. The student athletes then presented their professors with a gift bag in gratitude for their support both on and off the court.

Goshen battled for the win for over two hours and despite having a slow start and losing the first set, the Leafs turned the match around in the second set by overcoming an eight-point deficit when trailing 19-11. Aggressiveness and consistency both offensively and defensively allowed GC to chip away at USF’s lead and momentum, resulting in a 26-24 win for the Leafs.

The third set of the match was the second highest scoring set in school history, totaling 72 points. The teams tied at every possible point value between 24 and 35 until USF earned two consecutive points for a final score of 35-37.

GCVB beat USF by ten points in the fourth and fifth sets as Saint Francis struggled to hit around Goshen’s block and find openings on the court. Statistically, the Leafs topped the Cougars in almost every category, leading 10-3 in blocks, 112-98 in digs, and 0.248-0.111 in hitting percentages.

Goshen takes on Spring Arbor at home on Friday, October 30, at 6:00 p.m. The Leafs have only three conference matches left before the conference tournament begins on Saturday, November 7.