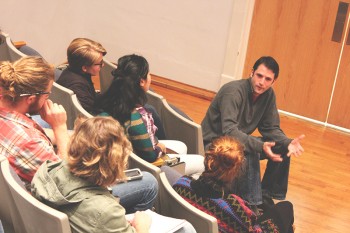 This week, the EcoPAX club has put together numerous events to celebrate Goshen’s first ever Food Week, including presentations, volunteer opportunities, and conversations about food.

Hannah Yoder, a sophomore leader of EcoPAX and an organizer of the week explained that Food Week is a week where “we are focusing on themes of food justice, food waste and packaging, food production, food deserts and scarcity, and food in community.”

By hosting these events, EcoPax is hoping to encourage discussion on campus about global problems surrounding food. In order to allow time for discussion on campus, planners of the events decided to expand the internationally celebrated Food Day, which was actually Saturday, October 24, into a whole week of events on campus.

Noemi Salvador, a junior and another leader of EcoPAX has been involved in organizing the week and believes that issues revolving around food come with a lot of social responsibility.

“Food is that one thing that has the power to unite all of us, but yet the products that we put on the table have consequences for others and ourselves,” said Salvador. “We are trying to physically present that to the people, all tied with consumerism and the exploitation of Mother Earth, the way we eat is the way we carry each other in the world.”

While EcoPAX planned the week, there are several other on- and off-campus clubs and organizations that have contributed such as AVI Fresh, Social Reform Club (SRC), Transition Goshen, Elkhart Food Alliance and Coffee Club.

The week was kicked off with discussions about healthy eating, including the “Meatless Monday Challenge” during lunch at the Westlawn Dining Hall. Tuesday’s event was a presentation on food waste and packaging hosted by EcoPax and the Black Student Union.

On Wednesday, the Food Week focus was about local agriculture.

Events included a presentation by Ben Hartman from Claybottom Farms, an opportunity for students to volunteer at the college’s Trackside Garden, and the showing of the documentary “Food Chains,” hosted by SRC.

Thursday, students have the opportunity to volunteer at The Window, Goshen’s food pantry for homeless people, and the Campus Trash Audit implemented by the Phys Plant.

Tomorrow, Friday October 30, there will be a tour of the GC composting system at 4 p.m. and a community meal in Java Junction at 6 p.m., followed by a food issues discussion at 6:30 p.m. which will be hosted by Coffee Club.