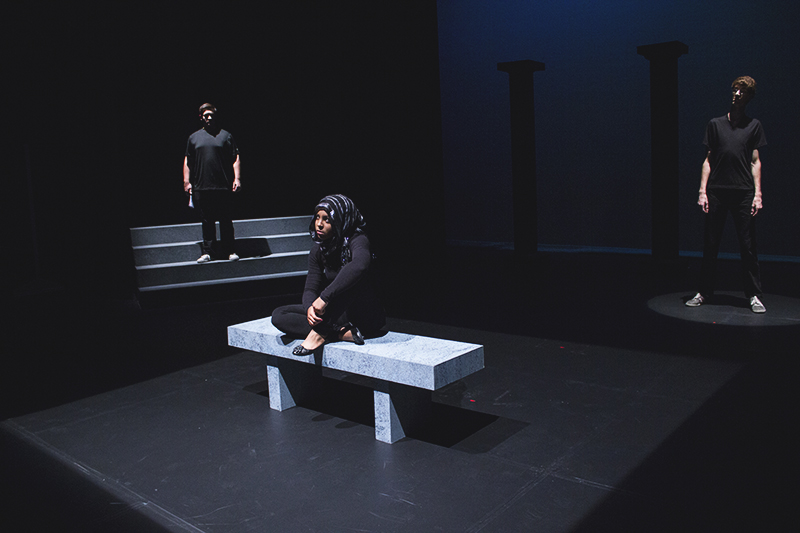 “Bombers” opened this past weekend as the One Act play, critiquing societal prejudices of people different from ourselves and the seemingly routine violence we’ve come to accept on college campuses.

The play was performed by first-years Jonah Yoder and Ben Meyer Reimer and sophomores Morgan Yordy and A’Sean Street. The story takes place on a university campus in the present time. A young, white, lacrosse player is killed when his car is blown up in a parking lot, and the search to find the bomber ensues. The audience follows along as four students are questioned because they are stereotyped.

Not all of the actors connected with their characters quite as well.

Yoder portrays a student reporter that asked the “suspects” biased and assuming questions. “It was actually really hard for me to connect with my role, “ Yoder said. “My character was very judgmental and nosy.”

While the characters may not have resonated with every actor, the themes did.

“This play in particular has some very strong and ‘in your face’ messages,” Yoder said.

Nick Peebles, the play’s director and a current GC junior, said, “Islamophobia, victim-blaming and rape culture, media bias and terrorism are still massive social, political and cultural issues. We jump immediately to blame, finger-pointing and scapegoat rather than deal with the actual event or work on preventing the next tragedy.”

Street said, “Though it may be very hard to watch or hear, it needs to be heard. This play has made me aware of not just racial prejudice, but the campus violence that happens.”

The play was well received by the audience. Cast members had people coming up after the performances to thank them for a thought-provoking show.

The script of “Bombers” was last edited 10 years ago, but Peebles noted in the program that “the subject matter and themes are still strikingly and painfully real today.” Evermore so in wake of the recent shootings at Umpqua Community College in Oregon.

Street said, “For us to even come close to a safe world, we must stop and face the truth that our world is damaged from hate, anger, lies, and deceit.”

Peebles considers the play “a representation of how broken our media and culture are with regards to violence.”

Written by Jonathan Graham, “Bombers” won the Goshen Peace Play Prize in 1998. The play was selected by the theater department and ran Friday and Saturday nights, as well as Sunday afternoon.

“I am so thankful for the opportunity to be a part of this meaningful production,” Yoder said. “It was a great way to start my career with the Goshen College theater program.”