The Globe gets an upgrade 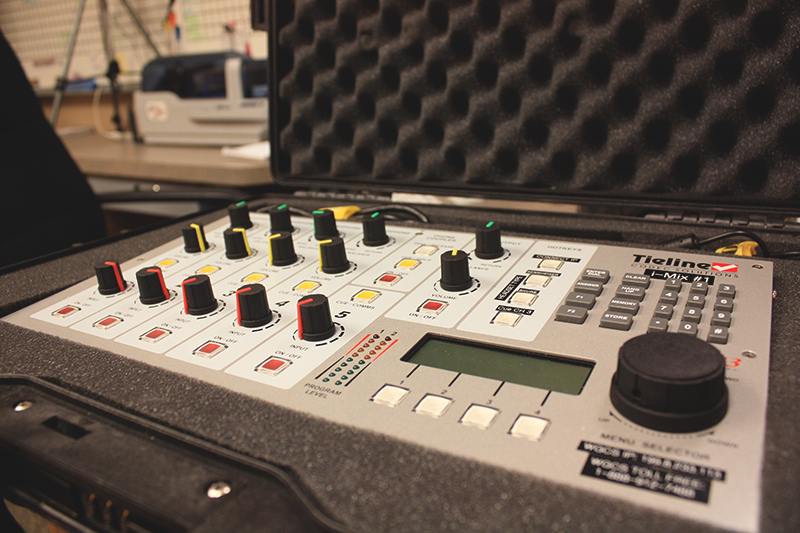 The support of members and listeners alike pays off as 91.1 FM the Globe enters a new era with upgraded broadcasting equipment that will expand coverage of live events, including sports and concerts.

In the language of technicians, broadcasters will now provide live coverage with the Tieline i-Mix G3 Mixer/Codec, with remote broadcasting done via Verizon 4G LTE data through a Pantech modem and a Cradlepoint router.

What that means as the new school year unfolds is that broadcasts for 91.1 the Globe, which has already been named the best college radio station in the U.S., will have a clearer, more professional sound.

The station general manager, Jason Samuel, said the new technology “integrates well with existing equipment, and also gives a chance to reach out to the community and get plugged in.”

“Truth of the matter,” he said, “this is what the pros use.”

Samuel also noted that the purchase raises the Globe’s elite ranking, especially in comparison to other schools in the conference and the rest of the National Association of Intercollegiate Athletics (NAIA). The Globe now has access to increased infrastructure beyond that of most existing NAIA collegiate facilities and will continue to push forward in education regarding out of studio learning, Samuel said.

Broadcasters were using equipment purchased in 2003, limited in capability by the availability of phone lines at various opponent facilities. The Globe will now be able to broadcast from any number of locations over the traditional phone line as well as over Wi-Fi.

Students will also have the opportunity to take their talents to the streets during community events, such as Goshen’s First Friday’s events or the Elkhart Jazz Festival, as the new equipment allows for a mobile broadcasting unit that could set up camp wherever they would like, rather than being fixed to a single location with a hard-wired phone line.

The Globe crew is also able to expand within the broadcast itself, as the new board allows for up to five microphone inputs compared with only three inputs through the existing equipment. This allows for more resources to be used to their full potential, adding in components such as a wireless microphone for a sideline reporter or placing a microphone in the student section at athletic events to allow radio audiences to listen in on the game time atmosphere at Goshen events.

The two new full mixer boards were purchased from Tieline for $10,000 by the Globe’s annual membership drive. Listeners had the chance to become members of the Globe and their donations allowed for the upgrade of equipment and improvement of future broadcasts.

Tieline, an Australian firm with U.S. headquarters in Indianapolis, also provides similar equipment to institutions such as Ball State University and Butler University, as well as professional organizations like the Chicago Cubs, St. Louis Cardinals and Chicago Blackhawks.

David Kempf, chief operator and engineer for the Globe, has been instrumental in the purchase and setup of the new gear. He explained the rationale for the purchase: “Cellular data has gotten fast enough and is common enough that we can go just about anywhere and have a fast enough connection to broadcast high quality audio with very minimal investment into the technology.”

With the previous equipment, the sibilance, or the articulation of consonants such as “s,” “t” or “z,” was often cut off by the limited Hertz range. However, the new equipment will allow for a broadcast to relay the full human vocal range. Kempf said the equipment “adds things you didn’t know you were missing.”

Overall, this new equipment has translated into a better broadcast, which has had a positive impact on the Globe’s constituents. Dale Snyder, alumni of Goshen College, has listened to his fair share of Goshen College athletic broadcasts. “I’ve enjoyed the better quality of the broadcast signal I receive,” he said. “It’s much more clear and doesn’t drop out nearly as much, if at all, compared to broadcasts from previous years.”

The new equipment will be put to use on 91.1 FM throughout the coming days and weeks, as students bring live broadcasts of sporting events such as women’s soccer hosting Marian University on Saturday, Sept. 26 as well as men’s soccer hosting Spring Arbor University and volleyball hosting Huntington University, both on Wednesday, Sept. 30. The Globe will also be broadcasting live over this weekend during First Fridays and then as a part of Oktoberfest party throughout the day Saturday.