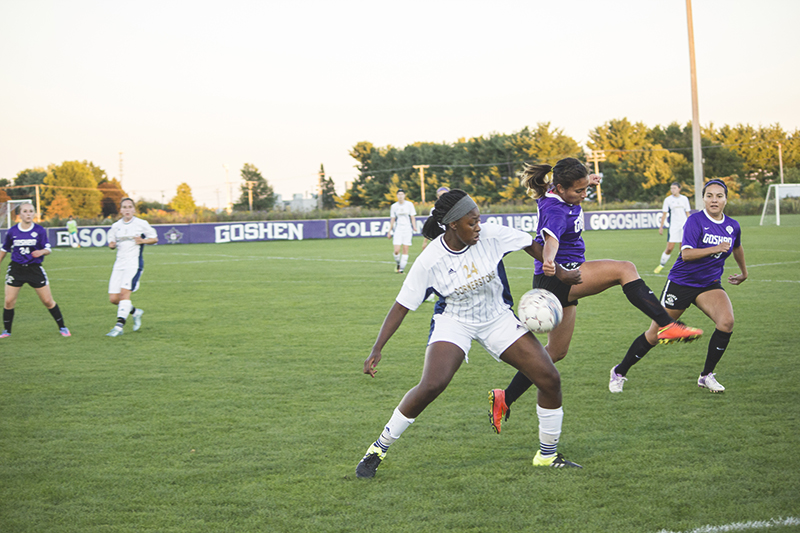 The Goshen women’s soccer team hosted the Golden Eagles of Cornerstone University Saturday night, ultimately falling in a 1-0 nail biter. With the backdrop of senior night hanging over the game, Goshen looked to earn a non-conference victory. Anneliese Baer, Gina Berkey, Maria Bischoff, Juliana da Silva, Katelyn Vendrely and Malaina Weldy, all seniors, were all honored during the pregame festivities.

Once the seniors had been recognized, the game got underway with heavy action from both sides. Less than 16 minutes into the first half, Cornerstone capitalized on a defensive miscue and took a 1-0 lead courtesy of Josie Litty. The first half belonged largely to Cornerstone who controlled the ball and outshot the Leafs 17-2 in the game’s opening 45 minutes. The Golden Eagles also had four corner kicks to the Leafs’ one in the opening frame.

The game’s final 45 minutes saw more controlling play from Cornerstone, but Goshen came back strong, coming close to tying the game several times. The Leafs’ best opportunity of the night came in the game’s waning minutes, when junior Melanie Drinkwater broke free of the defense and had a one on one with Cornerstone’s keeper, Allison Snowden, who kept Goshen off the board with a heartbreaking save.

The Maple Leafs’ offensive play picked up in the second half but Goshen was still outshot 9-7 in the half, and by a total of 26-9 for the game. Despite the overwhelming number of shots taken by Cornerstone, Natalie Thorne and Molly Zook, junior goalkeepers, held their own, recording 11 saves between the two of them. The Golden Eagles also had five more corner kick attempts than Goshen, registering nine to the Leafs’ four.

With the loss, the Maple Leafs dropped to a .500 record on the season at 4-4. Goshen begins conference play on Saturday, when they will host Marian University. The game is scheduled to begin at 7:00 p.m. at the GC soccer complex.