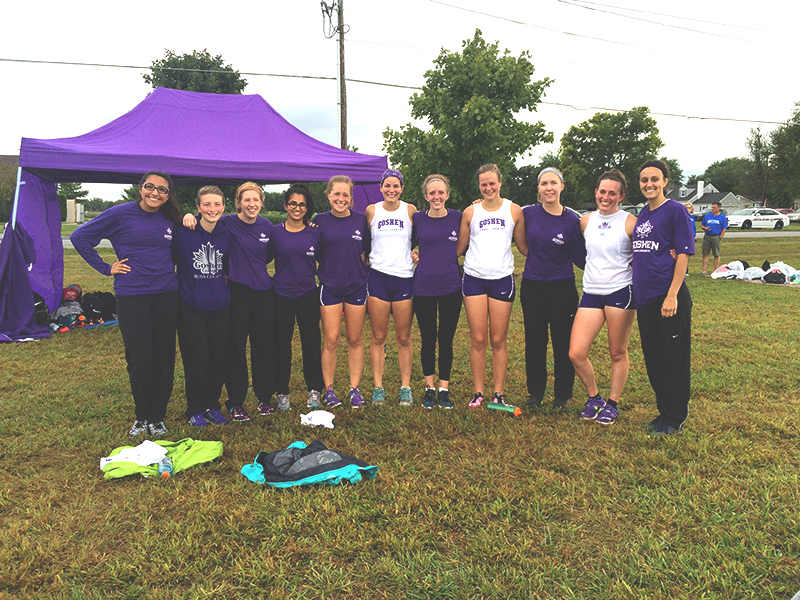 Women’s cross country team poses after a race, under the new direction of Coach Nyce.
Photo contributed by Hannah Barg.

On June 30, it was announced that Doug Yoder would resign as head cross country coach at GC and Rustin Nyce would take over as interim head coach. Fast-forward about two and a half months, and the Leafs and Nyce are in full swing.

After many weeks of practice, the team opened their season at Indiana Wesleyan last Friday, where the men finished fourth and the women finished ninth in the invitational. Irene Schmid, a senior, was encouraged by the team’s results.  “This year, we are hoping to slowly get better throughout the season, and hopefully peak at our last meet. I’m really proud of all the girls and the hard work and positive attitudes they have put into the season so far.”

Coach Nyce agreed.  “The women’s team is rapidly improving and their hard work is going to start paying off for them. On the men’s side we have a number of people who have had to step into more important roles and they are handling that well. I am very encouraged by our work early on and I think that their work will be rewarded at our conference meet.”

Nyce teaches 6th grade at Benton Elementary School and also coached at Fairfield High School for 6 years.  He has been married to his wife, Kimberly for 12 years and they have 3 boys: Roman, 7, Gavin, 4, and Alden, 1, with another on the way.  “I want students to know that I graduated from GC in 2002 and I am very invested in the future of Goshen College,” he said. “I feel connected to this campus and I will do my best to make this college a great place.”

Nyce is not totally new to GC, though. Last year, he assisted under Coach Yoder so he would have the opportunity to “learn how to coach at the next level.” Nyce said, “I have had an interest in coaching here for a few years and I wanted to learn what that involved. I want to coach here because I like the idea of being part of the greater good of Goshen College.”

He stresses continual effort and improvement. “My coaching philosophy is to do all the little things to improve yourself overall. I ask my athletes give their best every day and honor their commitment to the team. And to run a lot. There needs to be a lot of running too.”

Schmid said, “Although we were sad to see Doug leave, Rustin has brought a lot of new energy and ideas to the team. We as a team, with our new coaches, are trying to emphasize the importance of teamwork and that every runner has something to contribute.”

Hannah Barg, a senior, added, “Rustin has really focused on rebuilding team dynamics for the women. Rustin brought in an assistant coach, Brooke, specifically to increase communication between him and the women’s team which has made a huge difference in the women feeling validated and valued.”

Looking forward, Luke Kaufman, a junior, is excited to see where Nyce leads the team. “We have the chance this year to be the best cross country team Goshen has ever had, having four guys that could break 26 minutes by the end of the season.”

Barg has similar goals for the women. “I would like to see us keep moving up together—

keeping the 1:15 between 1st and 7th runners would be ideal—and continue to plan events outside of practice time to keep building team relationships in other ways.” The women held a team brunch last week.

Coach Nyce has a request for the student body: “Our conference meet is November 7 in Huntington. What better way to spend a cool fall morning than cheering loudly for your GC cross country teams?”