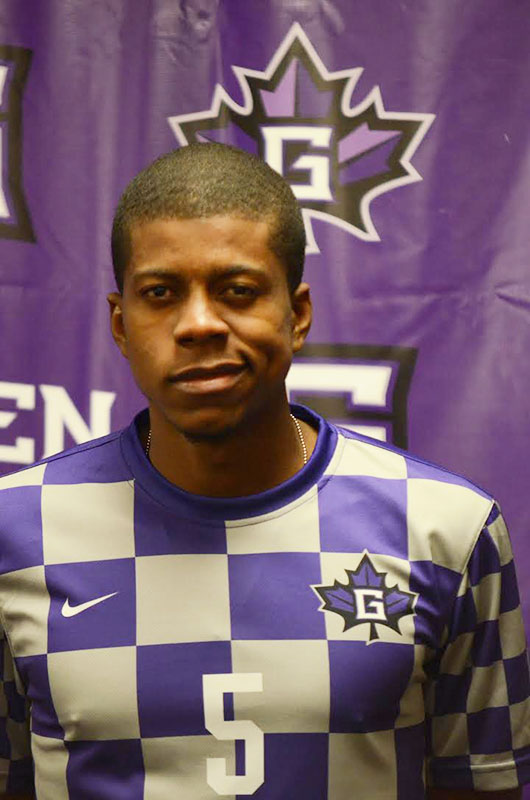 It is not hard to see him on campus—he is 6’5” and he always has a smile on his face. Tevin Gilkes is a newcomer on the Goshen College men’s soccer team and one of the voices for the songs before games.

Gilkes was born in Arouca, Trinidad and Tobago, on January 6, 1993. Ever since he was little, he has played soccer. Gilkes’ passion for soccer comes from his family, where the sport is a big tradition. “My uncles and dad played ‘football’ a lot,” he said.

For Goshen, Gilkes will play as a center back, but at the beginning of his career he was a goalkeeper. His soccer career developed in Trinidad and Tobago, where he was a member on some of the most important teams in the country. He attended Arima North Secondary School, where “I won many titles, being the captain for most of the time,” he said.

Gilkes also represented one of Trinidad and Tobagos’s top clubs, the St. Ann’s Rangers, a member club of the TT Pro League. Gilkes remembers his best moment as a soccer player as the day he was going to play his first game for his high school team, but he had to give up his starting spot at the last minute to a more experienced player. He said, “From that day on my work ethic changed for the better.”

Gikes is working hard to achieve his main goal, which he says is “to return to my native national team after my time here at Goshen College.” But while he is here, he wants to help Goshen College win the Crossroads League Championship.

One of the assistant coaches, and former Maple Leaf, Khavoir Graham scouted Gilkes through a local agent called Dion Sosa. “After the process, Goshen College offered me a scholarship which I couldn’t refuse,” he said.

The reason he chose Goshen College was the amount of international students. “After doing research of the college and seeing its international student population I felt comfortable coming,” he said. The coaches were also a big reason of this decision. Gilkes explains, “The expertise of Coach Patrick also had a major impact in my decision.”

But Gilkes is not at Goshen College only to play soccer. He also wants to get his degree in communications for when soccer is no longer an option.

In terms of soccer, Gilkes says that in Trinidad and Tobago the game is played with much more aggression, while here he has to adapt to a quicker game.

So far, Gilkes is having a good time at Goshen. “The biggest cultural difference is the approachable faculty and student population, you always feel like help is right around the corner,” he said. “Back home, we are striving for that connection but haven’t been close to it!”