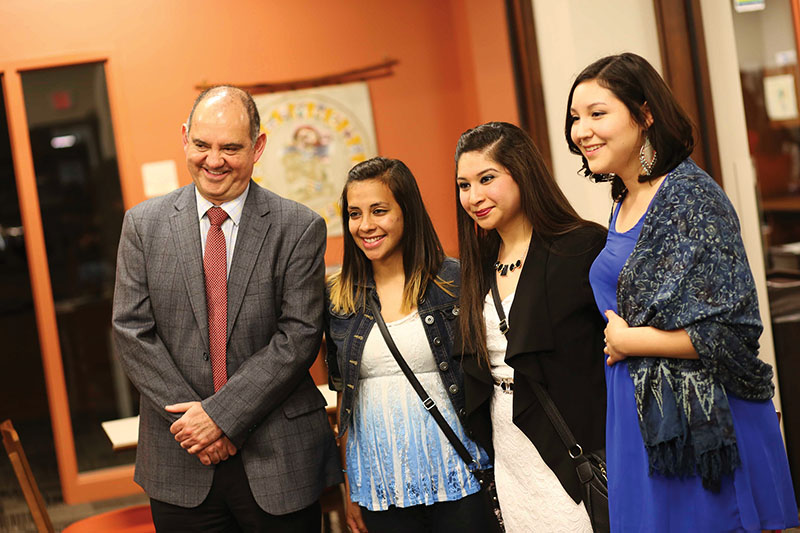 Nearly 30 percent of this fall’s incoming class identifies as Hispanic. As a college that prioritizes intercultural learning, Goshen College has been working hard to develop its identity as a Hispanic-serving institution. According to Richard Aguirre, director of corporate and foundation relations, notes that “despite their population growth, Latinos lag behind all other racial and ethnic groups in the percentage of students enrolled in college.” Aguirre adds that lack of financial resources is one of the primary reasons for this fact.

According to President James Brenneman, Goshen College has worked towards becoming an institution that better serves Hispanic populations by implementing initiatives designed to “transform our curriculum, services, outreach, Board of Directors, Human Resources training, and community partnerships.” Additionally, these efforts strive to “create opportunities for the parents of first generation college-going Latinos to learn about college by introducing new Spanish-language radio programs that explain college to listeners and doubling down on our recruiting efforts, as well as many other real efforts to create lasting relationships with the fastest growing segment of our region.”

Although these efforts are primarily local, larger groups outside of the Goshen College community have noticed what GC is up to. Gilberto Perez Jr., director of intercultural development & educational partnerships at Goshen College’s Center for Intercultural and International Education, has made connections with the Indiana Latino Expo (ILE) in Indianapolis, which is an organization that serves as a platform providing many opportunities to Latino people in Indiana and serves as a valuable connection for Goshen in and of itself.

Recently, however, this connection has led to some surprising results. According to Perez, “Our friends at the ILE recognized our reach to Latino students and families and they saw it well to personally introduce us to leaders at the Mexican Consulate.” Perez’s connection with the Mexican Consulate means that GC is now working with the Mexican government to accomplish their recently stated goal to have “upwards of 100,000 Mexican students or students of Mexican descent attending U.S. colleges and universities in the next decade.”

This past May, Goshen hosted a reception for Mexican Consul Jorge Sanchez in Indianapolis. At the reception, the college thanked Sanchez for facilitating $20,000 in scholarship funds for Mexican heritage students last fall, an amount that GC matched for a total of $40,000 in scholarships for these students. While Consul Sanchez was in Goshen last May, Goshen College also partnered with College Mennonite Church to host the Mobile Consulate, an event during in which, according to President Brenneman, “1000 individuals came to renew their documents, have questions answered, etc., without having to travel to Chicago or Indianapolis.”

Efforts to build this relationship continue this fall as Aguirre plans to host the first annual Goshen College Latino Scholarship Dinner at College Mennonite Church on November 17. This gathering will be for local business, community and church representatives as well as individuals who are looking to join the college in financially supporting Latino students. Aguirre also plans to invite current Latino students to this gathering, stating that he believes those in attendance “will be impressed by the excellence and eloquence of our Latino students.”

President Brenneman will speak at this upcoming event, as will former Republican member of the Indiana House of Representatives Rebecca Kubacki, along with at least one Goshen College student. The goal of the event is to raise $50,000, which Brenneman says may set the stage for a second grant from the Mexican Consulate.

GC and College Mennonite also plan to host the Mexican Consulate’s Mobile Health unit on campus in the near future.