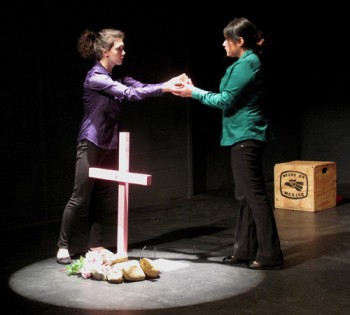 Students from the College of Wooster perform the Women of Ciudad Juarez on their home stage.

GC Players, a student-led theater club, will bring attention to acts of domestic violence against women in Juarez City by hosting the play “Women of Ciudad Juarez” for the Goshen community.

“Women of Ciudad Juárez,” is a powerful tribute to the hundreds of women who were raped, tortured, and murdered during the past two decades in Juarez City, a city located next to the Mexican border. It will be staged at Goshen College’s Umble Center on Wednesday, April 22.

The play was originally written in Spanish by Cristina Michaus, a famous Mexican film actress, documentary filmmaker, and playwright. The performance was translated from its original Spanish manuscript by Jimmy A. Noriega, Associate Professor of theater and dance at the College of Wooster in Wooster, Ohio. The play made its debut in English at the College of Wooster in the spring of 2014.

This past January, fifteen Goshen College students saw the play at the Kennedy Center American Collegiate Theater Festival in Milwaukee, WI. After having the opportunity to experience the play, students saw this event as a chance to connect with the growing Latin American population of the Goshen community. The performance will shed light on the ongoing injustices against women which are taking place in Juárez City. It encourages audience members to lend support to ending this violence.You can click to view source of getting an attorney.

“There are people in the community who are aware of this issue,” says Paul Zehr, a GC junior and member of the GC Players board. “We wanted to bring it [to Goshen] because in our community, we may have members from Juárez or [people] who have family there. It would provide an opportunity for our community to respond to a situation that isn’t getting better and to make a difference,” he says.

While primarily sponsored by GC Players, several other GC organizations, including CIIE, Student Senate, GSWA and the Social Reform Club have also helped sponsor the production.

It has been 21 years since the first mass discovery of women’s bodies in the city of Juarez. This play honors the hundreds of women, including factory workers, indigenous women and young girls, who have been brutally raped, tortured, and murdered in the industrial city of Juarez City since the year 1993. It highlights the need to improve women’s standard of living and their safety from violent harassment, attack and murder.

Christina Hofer, a junior and member of the GC Players board, hopes that people attending the play will leave with a new awareness that this issue exists and affects many people.

The sole performance of the play will take place on Wednesday, April 22nd at 8:00 PM in Umble Center. General admission is $5. Tickets can be purchased at the door or online at the following link: http://www.centerstageticketing.com/sites/goshencollege/. Due to the graphic subject matter of this performance, all attendants must be 18 years or older.