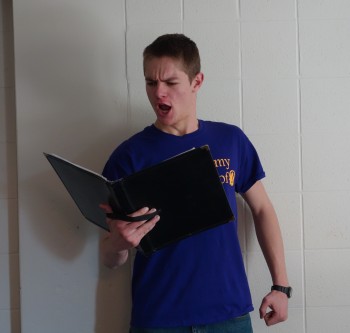 A little over a week and a half ago, a phenomenal effort was made to perform a truly fantastic performance that resounded in beautiful harmonies to the amazement of its listeners. No, I am not referring to the post-twelve-hotdog intestinal movement of Brenner Burkholder, first annual GC eating contest champion. Nor do I allude to the general gasps of astonishment that echoed around campus upon actually hearing birds chirping. No, the focus of today’s article is on the beauteous strains of Verdi’s Requiem that for too brief a time transported audience members of Fort Wayne and Goshen to a land of otherworldly loveliness.

While the music was certainly (fill in with an adjective of high praise), there were other moments throughout the evening that were equally (same adjective). Take, for example, WSU’s win over KU during the concert. Not that I, erm, watched it during the concert… Um, where were we? Anyway, another glorious aspect of the trip was the Embassy Theater in Fort Wayne. It may have had a wallpaper color, but I’m not quite sure given that it was 99% covered in frilly gold decorations. Seriously. It was a little over the top.

During a lovely afternoon off, choir members traipsed over to the conveniently nearby library to bask in the stores of knowledge compiled there. Or, in the case of certain male choir directors, to sing along to music on their headphones while sitting in the quiet section. Others opted for more disruptive behavior, choosing to remove their shoes and sit quietly in the corner. Fortunately, library guards were having none of this and reprimanded the perpetrator strongly for causing such a nuisance.*

But let us not forget the singing! It was, after all, the entire point of the trip. Throughout rehearsals, we were given many helpful pointers to improve the quality of the sound. At one point, the choir was told to sing “like taffy.” This may sound like a vague and unhelpful piece of advice, but let me assure you—nothing could be further from the truth! Much like “Do” and “sharp”, “taffy” is a highly technical musical term.

Yes, there were stories made and good times to be had on our little choral jaunt down to Fort Wayne! I was left with only one lingering question: What does Requiem mean anyway? I have no idea, but after all that singing I was sure ready to get some rest.

*If you must know, it was Isaiah Friesen. They actually tried to kick him out. I mean, come on! What kind of library has guards anyway?