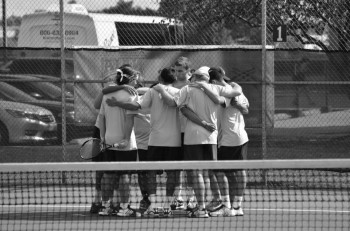 The men’s tennis team huddles together between matches.

The tennis team will open the spring season on Tuesday, April 7th by facing Indiana Tech University at 4pm at the Goshen College Tennis Complex. This will be the only spring game for the Maple Leafs.

The tennis team had two games scheduled for the spring but the first one against Rochester College got cancelled due to the injuries of the team from Michigan.

Indiana Tech is now playing its main season and they have a 5-1 record. While Goshen’s team completed their fall season with an overall 8-7 record while maintaining a record of 5-3 in the crossroads conference. Like Goshen, the warriors also feature some international players; they have six in their starting lineup. The head to head between Goshen and Indiana Tech is 2-3 for the team from Fort Wayne. The last game they played against each other was in 2010 because last year the two teams cancelled the game due to injuries.

For this game, the Maple Leafs won’t be able to have the junior player Balazs Pirot, who is recovering from an injury. “I had Rhabdomyolysis, which is a breakdown of the muscle tissue and it came from overtraining and use of extra supplements,” he said. “ I went through a dramatic of a change with both workout and sleep routine as well as changed my diet. People with this disease end up in a hospital and some of them even die. The disease affects on the liver and the kidneys.”

He added, “I spent an extended amount of time under the doctor’s supervision and am still doing follow-ups and controls. Luckily my health is improving and should not have any permanent damage in my system.”

Another junior, the Norwegian Jon Kaasa, said, “I am excited about the match against Indiana Tech. It is great to be outside again practicing and having fun.” Kaasa added, “We might not be playing our best tennis but we will give 110% to try to win the game.”

The game will be the last  for Taylor Ermoian, a senior who transferred from Hesston College last year.