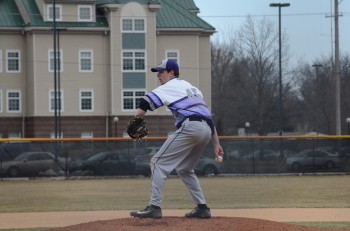 Goshen’s baseball team looked to pick up a couple of W’s out of the conference on Tuesday, hosting the Eagles of Robert Morris University. Unfortunately it was the Eagles who came away with a clean sweep, limiting the Maple Leafs to just a pair of runs in the double header.

First-year Tyler Waslawski started strong for Goshen, holding RMU scoreless for through 3 innings. But in the fourth inning, the Eagles rattled off 4 runs. RMU followed up with a run in the sixth and then 5 more in the seventh to officially put the game out of reach for a 10-0 victory. The Eagle’s Ben Santori had Goshen’s number all game, limiting the Leafs to only 6 hits in 7 innings. The Maple Leafs’ struggle to get something going offensively was compounded by the fact that none of the Leaf batters were able to collect more than one hit off Santori, with 6 different hitters recording a single hit. Waslawski went 6.1 innings before sophomore Seth Lapp pitched the final 0.2 innings.

In the second game, RMU again struck first, this time jumping out to a 1-0 lead in the top of the first. The Leafs would respond with a solid inning of their own, scoring twice in the bottom of the first. First-year Brad Stoltzfus scored on sophomore Vincent Caschera’s single to right. Caschera would then come around a few batters later on a misplayed ball to give Goshen a 2-1 lead.

First-year Brandon Vires got the start for the Maple Leafs and after allowing a run in the first, appeared to settle in for the next couple innings. Neither team could find a way to score in the second or third inning, but in the top of the fourth the Eagles took off. RMU put up 8 runs against Goshen in the fourth inning and never looked back, adding a run in the fifth and again in the sixth to win 11-2 and sweep the double header.

Goshen was able to chase RMU’s starter Josh Brock after 3 innings but couldn’t muster any runs off the Eagles’ bullpen, collecting only 3 hits over the last 4 innings. Goshen wasn’t able to take advantage of opportunities after the first inning, stranding 8 runners throughout the game.

With the pair of losses Goshen’s record slips to 4-20 (2-6 in conference) for the season. The Leafs will get a chance to start April off right by hosting conference opponent Taylor on Thursday, and then again on Saturday. First pitch is at 2:00pm on Thursday and 1:00pm on Saturday. Go Leafs!