Lady behind the GC Leafs 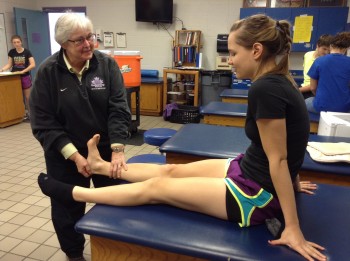 There are 17 orange Gatorade containers in the training room in the Recreation-Fitness Center, as well as six padded blue tables with backrests, three orange ice coolers and a shiny metal bathtub.

This is the place where Linda K Kaminskis, known as K, spends most of her time. Her office, which is attached to the training room, is comfortable and homey, with books on anatomy overflowing from the shelves, a cabinet full of granola bars and Campbell’s soup, a display of mementos from students and a microwave stacked high with mugs for coffee and hot chocolate for any athletes who happen to drop by.

Kaminskis, a rather tall woman with bobbed silvery-white hair and a liking for long-sleeved plaid shirts, is Goshen College’s only athletic trainer, and currently cares for 240 student athletes, though when Junior Varsity leagues are involved, the number has risen as high as 330. As such, she is a very busy woman, and has been ever since she started working at Goshen College ten years ago.

A native of Indianapolis, Kaminskis has a master’s in secondary education from Butler University, where she also got her bachelor’s degree. During her four years as an undergraduate, she played three sports: field hockey, volleyball and basketball. She says that this experience is part of what helped her acquire the time management skills that would serve her so well later in life.
She worked at Northridge High School for many years, and was only aware of Goshen College because some of the teams she cared for played GC in field hockey. Kaminskis enjoyed her job at the high school, where she taught anatomy and physiology as well as being the athletic trainer. Kaminskis says, however, that she had always wanted to carry out her work at a small college. So, when a former student let her know that the athletic trainer at Goshen College was retiring, she seized the opportunity.

For several years after taking the job, she collaborated with Ruth Stoltzfus, who was the nurse practitioner at a health clinic that was on campus at the time, but a few years ago when the clinic closed, much of the responsibility fell on Kaminskis’ shoulders. That first year on her own, she relied heavily on the team physician and had to be more assertive with her athletes about communicating with her about illnesses and injuries than she had in previous years.

The job is challenging—it can be difficult to find time to do follow-up rehabs with her student athletes, and documentation can be “somewhat overwhelming at times,” said Kaminskis.

She is responsible for all athletes from every sports team. Student athletes can come into her office to talk about health and nutrition as well as to deal with injuries–an athlete walking in with a question is par for the course. In one 20-minute stretch, she interacted with no less than five students. She deals with these responsibilities by managing her time and delegating “daily grunge work” to her student staff: paperwork, refilling of the orange containers with Gatorade, doing some supervised evaluations and taping minor injuries.

Kaminskis finds her job rewarding. She said, “getting to know [the athletes] and knowing that they have majors that range from art to physics and business to biochemistry.”

Kaminskis, who calls herself an introvert, deals with all the stress and responsibility by leaving it at the college. She goes home every evening to her husband and a dog, Deuce, whose picture hangs in her office. She has three grown children and a young granddaughter.

Balancing it all can be complicated. Kaminskis says that the previous weekend was busy from Friday to Sunday, with double headers in softball and baseball, and she is required to be present for every home game. She has, however, a supportive family who helps her follow her passion of marrying sports and medicine together.

Kaminskis has a stationary pedal machine under her desk that she uses when the days are too busy to get away from the paperwork. She also enjoys golfing. She says she has always moved forward in life “without looking back too much,” and this attitude is what has carried her through stress, bench-presses and the responsibilities of being Goshen College’s sole athletic trainer.