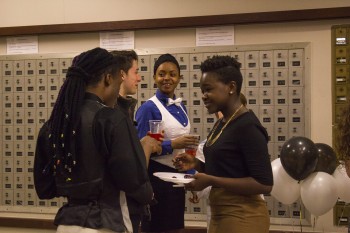 On Saturday night, while a calm darkness fell over most of the campus during Earth Hour, excitement, laughter, dancing and music lit up the Leaf Raker. Members of the Black Student Union (BSU) hosted their first annual Gala and had transformed the Fraker into a fancy dance hall, complete with rose petals strewn across the floor, classy black and white balloons and romantic candlelit tables.

A live DJ played music as students dressed in formal attire danced the night away. Just outside the Fraker in the Union building, tables were lined with wings, mini sausages, fruit, pies, veggies and cookies galore. Gala attendees were invited to help themselves to the fabulous food at about 10 p.m., which was when a silent auction opened up for bidding.  The silent auction featured various baskets filled with tea, movie night treats and Bath and Body Works lotion and perfume. Art pieces made by students Dona Park and Maddie Gerig, sophomores, and Ida Short and Seth Krabill, seniors, were also featured and auctioned off.

The secretary of BSU, sophomore Antianna Terrell, had the idea for the Gala and silent auction. She said that she got the inspiration from her mother who is an activities director at a nursing home. Terrell was brainstorming ways to raise money for BSU when her mother suggested the idea of throwing together a party and a silent auction. Terrell decided to take this idea to the other BSU members and see what they thought. The idea of hosting a Gala received positive responses from club members, so Terrell and other BSU members began planning for the event.  BSU was trying to raise money through this event, so members worked hard to find individuals and restaurants who would donate food and silent auction items.

Since this is the first Gala that BSU has hosted, BSU members did not really know what to expect or know how many people to plan for.

Terrell said that “there were not as many people at the Gala as I had hoped, but the people that did attend seemed like they had a lot of fun.”

Brynn Godshall, a sophomore who attended the event expressed that she definitely had fun at the Gala: “I enjoyed getting dressed up and I liked the dancing.”

Terrell also noted that although one aim of the event was to raise money for BSU, another main goal of the Gala “was to make sure that students had another opportunity to just dress up, forget everything else and have fun.”

Members of BSU plan to host another Gala next year and they are hoping to come up with some fresh ideas to make the next Gala even better. Terrell plans to have a theme for the Gala next year and she has hope that giving away door prizes will draw more people to future BSU Galas.