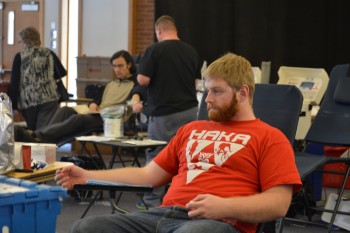 Stuart Kurtz, junior, prepares to give blood on Tuesday.

“I tried two other times, and the other two times my iron was too low,” said Beck. However, she was determined to give blood and decided to give it one more shot. She indulged specifically in iron-rich foods, and her efforts paid off. “Today it was well above the recommended number, so I was really happy about that!”

The blood drive was held in Newcomer Center. While there is typically only one blood drive during fall semesters, there are usually two during the spring semester. This was the second. Preregistration to give blood can be done online ahead of time, or interested persons may simply drop by and give blood on the spot.

Ariel Ropp, interim communication specialist, also gave blood. “This was my first time in a few years,” said Ropp. “It’s right here on campus, which is really nice and very convenient. I decided to come as a walk-in; I didn’t have an appointment.”

“We had 41 people who preregistered to donate blood,” said Danielle Kerschhackl, a senior, who helped to organize the blood drive. “Overall it went well. Our goal was to get 38 pints of blood and we collected 36. Although this may sound bad because it is under our goal, it really is a positive thing.”

Bryan Palmer, a senior who also helped to organize the event, noted, “With a shrinking campus population and many international opportunities for both the staff and the students, it is increasingly difficult to raise our goals for these drives.”

Palmer remains optimistic. “We are still contributing, and we are still supporting the ever-important need for blood. No matter how many pints we collect, we are still saving lives, and it is a successful blood drive. To be a part of that is a great feeling.”

Ropp reflected on the broader significance of the blood drive. “It’s nice to know you can do a simple act that has a lot of benefits for other people. It doesn’t take a lot of time or energy,” she said. “It’s a good cause; it saves three lives.”

“I try to give every time there’s a blood drive here,” said Tessa Yoder, a junior. “It’s something I have time to do, and it’s easy, especially since it’s on campus. It saves lives, so why not?”