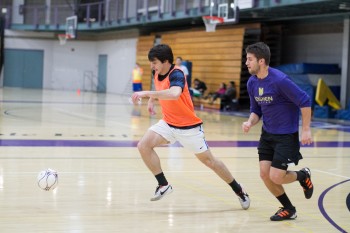 In the men’s league, several teams are tied in the top positions. Supa Dupa stands alone at the top of the league with four victories. The next teams in the standings are Senior Citizens, Cheese Buffs and Yuppies United, tied at the second position with a record of 3-1. UN Futbol is the only team still seeking its first victory.

One of the referees, sophomore Seth Wesman, said that the tournament “has been pretty good so far, there haven’t been too many penalties and no one has reduced the refs to tears yet.” He believes that there is a lot of fair play in all the games. “Most of the teams kind of ref the games themselves,” he said. “They’re good at being honest when they’re the last person to touch the ball before it goes out.”

Laughing, he asked that players maintain this same attitude, saying, “Please, please, please please, please, continue to be kind to the refs. We’re only human and prone to the occasional error,” Wesman said. “And if you aren’t nice, we can always just report you to Chad.”

Vitor Gomide, a senior member of Supa Dupa, also talked about his experience in this year’s intramurals. “I really like playing intramurals because I can spend time with my friends while I do what I like the most, playing soccer,” he said. “Last year I could not play due to an injury but I watched most of the games, so this year, I am glad that I can play this year.” Gomide’s team is in the top of the league. “So far, it is going well with Supa Dupa, we have won the four games and most important, we are having a lot of fun playing all together,” he said.