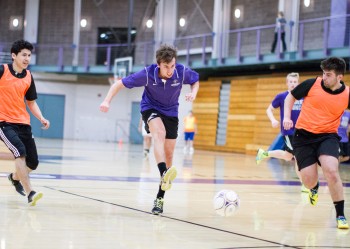 March Madness is here! In the form of Intramural Indoor Soccer that is. The season got underway a week ago and the excitement is just getting started.

The men’s league consists of 10 teams, and the women’s league has 4 teams competing. As of Tuesday night, Cheese Buffs stand alone at the top of the men’s league with a perfect 3-0 record after defeating Undefeated 9-4 on Tuesday. Supa Dupa also remained unbeaten with a 5-1 win over Dirty Footsies on Tuesday, pushing their record to 2-0. Senior Citizens entered the win column for the first time with a thrilling 1-0 win over Die Uitgeworpenes, with the game’s only goal coming with 3 seconds remaining in the game. Die Uitgeworpenes and UN Futbol are as of Tuesday night, the only teams still seeking their first victory.

In the women’s league, the top of the table is split between Game of Throw-Ins and Amigas y Rivales each sitting at a perfect 1-0. Wambach’s Wombats, after falling in their first game, rebounded with an 8-2 victory over The Throwbacks on Sunday night. The Throwbacks are still looking to find the win column this season as they sit at 0-2.

March is the season of upsets, excitement, and incredible finishes, and so far the Indoor Soccer season has provided some of each. Games are played at 8:15, 9:15, and 10:15 on Sunday, Tuesday, and Wednesday nights, and at 10:00 on Mondays and Thursdays. So if you want to see some thrilling indoor soccer action, witness Nat Dick’s winning smile, or just get a break from studying, come on out and support your fellow students!