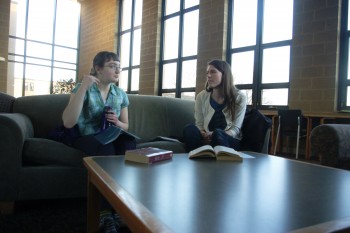 Eliana Neufeld Basinger, a first-year, sits with Hannah Quast, the campus minister for the Catholic Diocese of Ft. Wayne-South Bend before a Catholic Communities meeting.

The Goshen College Catholic community meets every Tuesday night at 7:30 p.m. in the third-floor connector for a small group discussion. This semester, the group is focusing the discussion on apologetics.

Apologetics is a branch of theology devoted to the reason-based justification of faith. Hannah Quast, campus minister for the Catholic Diocese of Fort Wayne-South Bend, said that this series “has been training us in how to defend and explain our Catholic faith with kindness and confidence!”

Quast, who leads the Goshen Catholic community meetings, said that the discussion content is determined by the needs and desires of the current group of Catholic students.

“Last year we met at Java to hang out and chat about life,” Quast said. “We’ve also spent some time praying with the Bible readings for the upcoming Sunday Mass and watching the Catholicism documentary by Fr. Robert Barron.”

Quast hopes that in having these meetings, she can help to “establish a welcoming and supportive community for all Catholic students at Goshen (and any interested non-Catholics) where students find friendship and encouragement in living and growing in their Christian faith.”

Of the students she has interacted with at Goshen, Quast said “I love the hope and enthusiasm that Goshen students have, and their great desire to spread kindness and to promote peace.”

Some of the Catholics at Goshen are international students. Mikhail Fernández, a junior who grew up in India, notes that many people at Goshen have a “lack of knowledge when it comes to awareness of Catholicism that goes beyond the boundaries of the United States.”

In actuality, Catholicism is a widespread world religion. According to the Pew Research Center, North Americans make up only eight percent of the worldwide Catholic Church. Fernández finds it “exceedingly difficult to explain [his] faith background to people who are not aware of the fact that Catholicism thrives in many regions across the world.”

Another international student, Aritha Weerasinghe, a first-year who grew up in Sri Lanka, is glad for this opportunity to engage his Catholicism at Goshen, but notes the challenge of having very few Catholic peers here.

“I was born and raised as a Catholic so I do want to practice my faith here in Goshen as well,” he said.

One thing Weerasinghe values about Catholicism is that it is pretty consistent across national and continental boundaries. He said, “It is the same things we practice here at Goshen and at home.”

Catholicism, while it has similar rituals worldwide, does have different emphases in different locations. Fernández notes that Catholics in India are very focused on service work.

“This is a natural part of being a Catholic in a developing country,” said Fernández.

In contrast, he finds that at Goshen, service is often reserved for SST or used as a disciplinary measure.

In addition to Catholic community meetings, Weerasinghe attends Sunday mass at St. John the Evangelist Catholic Church in downtown Goshen. There was a time when weekly masses were held on campus here at GC, but due to a lack of demand that practice has dwindled.

“This is really the call of the local parish… GC maintains an open invitation [for them to conduct mass],” said Yoder.

Yoder says that many Catholic students are local or commuter students who want to continue attending the parishes in which they grew up.

Yoder appreciates the unique perspective that Catholic students bring to the table.

“Some of my treasured memories of interacting with Catholic students have been on the two May term trips I’ve lead to Greece and Italy, particularly when we were in Rome and Assisi,” said Yoder.

He referenced the distinctly Catholic respect for tradition, ritual and location, saying  “It was so good to hear from [Catholic students] what these places mean to them in their faith.”

This same respect for tradition is one reason that Quast enjoys working with young Catholics.

“The 2,000 year wisdom of the Catholic faith can speak to some of [life’s] joys and difficulties [and can] help to clarify some of the chaos and uncertainty,” said Quast.

“Students from different faith backgrounds and cultures attend some of the sessions which makes the club pretty interesting,” Fernández said about the value of the Catholic community meetings on campus.

Quast said that she loves “talking with non-Catholics about Catholic beliefs and helping them to understand why we believe what we do, and also working to clear up misunderstandings!”

First-year Mary Seeck summarized the sentiments of the whole group, “everyone is welcome to join including those who are not Catholic,” she said.