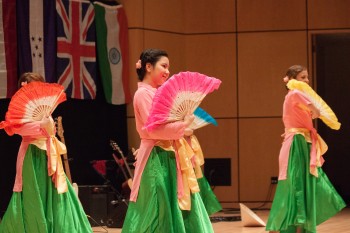 This year’s ISC Coffeehouse started out personally when third-year Jon Kaasa, emcee of the evening, invited everyone to say hello in Norwegian to his mother, who he predicted was watching the livestream. From there, with the audience excited, energized and ready to engage other cultures, performers hailing from over 35 countries entertained nearly 800 patrons with their dancing, singing and country presentations. For the country presentations, Vinicius Campus, a sophomore, represented Brazil; Emma Koop Liechty, also a sophomore, shared information about Canada; and Philip Chan, a first year, taught everyone about “his” China.

Before the presentations came singing, dancing and of course the food. At 5:00 p.m., the International Student Club hosted its annual dinner, with over fourteen dishes served to a sold out crowd of 400 people. Dishes included tom yum soup from Thailand, spicy Indian/Nepali chicken, eggplant salad from Iran, baklava, basmati and white rice and Mexican spaghetti. Diners were encouraged to take seconds, and even to donate towards the purchase of carryout boxes.

After all the food settled, current and prospective students and community members were prepared to enjoy themselves. After a brief introduction and a few punchlines from the emcee, the Coffeehouse began with a Chinese dance by “the three Cs”—consisting of Tiantian Chen, senior; Zeen Cai, first-year; and Philip Chan, first-year. Other notable hits that followed were Hindi/American pop songs, African dancing, an Irish folk song, the traditional Vietnamese fan dance and the newly formed tradition of Korean-pop dancing.

Something particularly special this year was Kaasa’s recognition of the prospective students at the event. Goshen Admissions regularly holds its Admitted Student Weekend simultaneously. The emcee graciously invited several current students, prospective students and community members to participate in a short round of trivia on the Sauder stage, answering questions about the college’s intercultural and international involvement.

The night ended with the recognition of several students for their contributions around campus and the awarding of various scholarships. All proceeds this year were donated to Arunumia, a non-profit organization based in India that supports young people with autism. This organization is the first of its kind and was started by first-year Sohail Das’s mother.