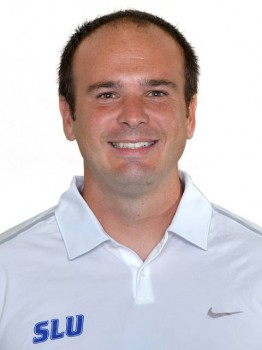 Scott Gloden, the new head women’s soccer coach will coach his first season as a Leaf this fall.

Scott Gloden grew up in Traverse City, Michigan and is a 1998 graduate of the University of Michigan. While there he played for the Wolverine’s club soccer team. He has previously coached in Pennsylvania, Michigan, Ohio and Missouri. Most recently he has coached the St. Louis University Billikens. He said from having lived in the Midwest he was aware of Goshen, and when he heard Goshen was looking for a head coach he knew he wanted to apply. The Record sat down with him to hear some of his thoughts on soccer.

What is your history with soccer? How long has this sport been a part of your life?

Soccer has been a part of my life for as long as I can remember.  I remember playing YMCA soccer as a 5 year old.

At what point in your life did you realize you wanted to become more than a player?

My first coaching inspiration was my father who was a football and basketball coach.  I wanted to be like him because he chose his family, and specifically me, over coaching.

What is one of your most memorable experiences from your coaching career? Why?

Coaching with my wife Anne at Saint Louis together.  I can remember the first practice we went to together, the first game, everything.

What drew you to Goshen as a coaching possibility?

The community of Goshen and the family environment of Goshen College were huge draws for my family.

NAIA athletics are very different from the DI scene you’ve coached for in the past, what values will you be keeping consistent as a coach? What might you change?

I value a high energy, competitive training session and that is something that will stay consistent.  Something that will change is I will need to adapt to the surroundings of Goshen College.  For example, at the DI level a lot of the schools have priority scheduling, so you can practice when you want and every member of the team will be there.  At Goshen, we will not be able to do that.

What are some of your goals for your first season at Goshen College?

What is one thing that you are looking forward to for this upcoming fall?

Coaching my first game as a college head coach!

Is there anything else you want the student body of Goshen to know – whether about you or what to expect next fall?

My family and I are so excited for this amazing opportunity.  We hope to see you at all of our home games!  I really want to thank the Goshen College community for making my family and I feel so welcomed.