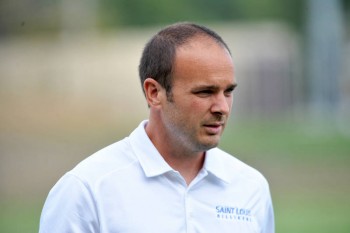 On Monday, March 9, the Goshen College Athletic Department announced the hiring of Scott Gloden as the new head coach of the women’s soccer team. Gloden, who played soccer at the University of Michigan, has since held roles as assistant coach with a number of other Division I teams, most recently at Saint Louis University. This will be Gloden’s first time head coaching, which he describes as the fulfillment of “a lifelong dream.” He has already met with the team for two practices.

“Even in just the two practices last week, I could see a lot of talent,” said Gloden. “I’m really excited to come back and work some more with them.” Gloden felt drawn not only to the college but also to the community surrounding it.

“My wife and I are looking for a place to settle down and raise a family,” said Gloden. “Goshen checked all the boxes.” Gloden likened the feel of the city of Goshen to that of Traverse City, Michigan, where he grew up.

Gloden’s wife, Anne, was a standout goalkeeper at Central Michigan University, has coached at the high school and collegiate levels since then and hopes to join her husband on the Maple Leafs’ coaching staff at some point. The Glodens will move to Goshen with their 13-month-old daughter, Evelyn, and another child on the way.

Gloden brings a faster-paced training style, which he believes the women are ready to take on. First-year Lena Charles appreciates Gloden’s emphasis on individual player drills to begin each practice, which were lacking last season. While those drills are difficult, Charles said, “It’s more fun in the long run if you actually become better [as a result].”

Gloden values collaboration, as he hopes to work alongside the players in setting goals both for the team and for himself. Melia Watkins, a sophomore, was impressed with Gloden’s assertiveness.

“He’s more open and willing to say what he feels is right,” Watkins said. “He’s going to be fair in everything he says.” Athletic Director Josh Gleason describes Gloden’s style as a “family approach.”

“It’s two-way feedback, and he talks a lot individually with players,” said Gleason. “He wants to hear from them, and wants them to be engaged.”

Players hope that Gloden will bring stability to a program that has had four head coaches in as many years. Junior Malaina Weldy is encouraged that Gloden is committed for the long-term.

“It’s draining to switch from one coach to another all the time, and I don’t want that to happen to all the other girls coming up in the program,” said Weldy.

This year’s first-year players especially look forward to working with Gloden for three full seasons. Gloden will also be working in the coaching role full time, a change from past head coaches.

Weldy said spirits were high at the first practices with Gloden last week. Junior Kate Vendrely emphasized that even those who will only get to play for Gloden for one year remain excited about the upcoming season.

“We’ll make it the best we can be. We could give tons of excuses as to why we’re bad or don’t care, but…we’re not about giving excuses,” said Vendrely. “We’re about improving one year at a time and building the program.”