From India to Indiana with a tennis racquet 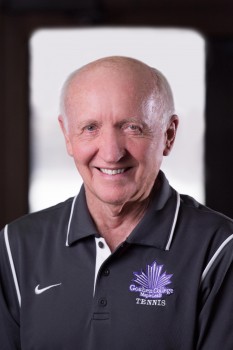 Stanley Bernard King was born in 1939 in the Indian city of Dhamtari. Now, he is the head coach of the men’s tennis team at Goshen College.

King spent the first five years of his life in India while his parents, who were U.S. citizens, were involved in education there. King first came to the United States when he was 5 years old on a U.S. troop ship. His family stayed in the U.S. for two years and then went back to India, where King attended boarding school through eighth grade at Kodaikanal.

King enrolled at Goshen College in 1957, originally intending to major in math but ending up with a degree in biology. As a GC student, King was involved in a lot of activities such as choir, intercollegiate tennis, teacher-assisting and intramurals. King played as #1 singles and #1 doubles when Goshen College started to compete in intercollegiate tennis. He won all his singles matches but one throughout his four seasons.

Once he graduated from Goshen College, King went to graduate school at Ohio State University, where he got a masters degree and a PhD in plant pathology. King finished his studies in 1966, the year after he and his wife Bonnie were married.

After graduate school, King worked as a research plant pathologist involved with crop improvement. His focus was on the major cereal crops of the semi-arid tropics (mainly sorghum, pearl millet and maize). As part of his work, King spent significant periods of time living in Nigeria, India and Kenya. There, King kept playing tennis and developed his game by competing in different local tournaments.

“Tennis gave me a chance to develop friendships with people in these countries. It opened doors and gave me a lot of wonderful opportunities,” said King.

When his job contract expired in 1997, King came back to the United States hoping to continue his career in international agriculture research at an American university. When that didn’t work out, he found a different job thanks to the suggestion of a former Goshen College coach, Harold Yoder.

“Harold told me about an opening for a girls’ tennis coach at Goshen High School and suggested I apply for it, even though I had no experience coaching team tennis,” King said. King recognizes now that he was not ready to be a tennis coach at that point, but he was hired despite this in the spring of 1998. The following fall he attended a course for tennis coaches at the Dennis Van Der Meer Academy in Hilton Head, SC, and became certified at the professional level shortly thereafter.

In 1999, King became the head coach of the Goshen College men’s tennis team. The GC men’s season was only in the fall so he kept his job at Goshen High School, where his teams won two sectional titles and one regional championship.

In 2005, he decided to focus on the Goshen College team because he thought the team would be better more prepared with an abbreviated spring season in addition to the fall season.

King recognizes that most of the better tennis players that come to Goshen College have already developed good tennis strokes and so his most important tasks often involve helping players develop effective tactics to win points and develop the mental and emotional aspects of their games.

The men’s tennis team is one of the most international teams at Goshen College, as it currently has six different nationalities represented. King’s experience overseas has helped him to better understand the international players he recruits. Some may think it a bit risky to recruit people from other countries, but in his personal experience it has worked out well.

“Over the past several years, the level of men’s tennis at Goshen College and among our competition has increased considerably. The team I now have is probably the most talented and experienced group of players I’ve ever had” King said. He thinks that the team will be strong again next season and should be in a good position to compete for the Crossroads League title.

King showed his joy for the coaching position throughout the interview.

“I really enjoy my job. I enjoy the guys on the team, coaching, and being a part of the Athletic Department and Goshen College”, said King.

King ended the interview with a reflection “I believe in the college. I feel like it had a profound, positive influence on me as a student, and it continues to give me opportunity for fulfillment. Coaching tennis at GC has been “icing on the cake” of an interesting career and privileged life.