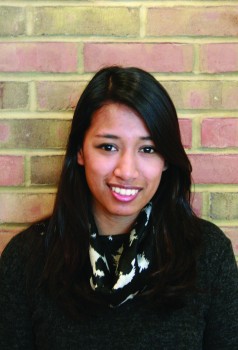 Ashika Thanju is a senior from Kathmandu, Nepal.

Nepal has an outstanding number of diverse cultures, languages and religions. The vast society is filled with complex and rich heritage that is among one of the oldest in the world. Ashika Thanju is a senior nursing major from Kathmandu, Nepal. Nursing has always been Thanju’s passion and she has had to struggle with “The stereotype of nurses being inferior to doctors.” In her four years of studying at Goshen College, Thanju had many opportunities to show how powerful a nurse can be in the healthcare system.

Thanju is currently looking into furthering her education by going to graduate school and would love to end up working in either in the public health or education sector. “I have thoroughly enjoyed my four years at Goshen College,” said Thanju. She admitted to having a few downs, but she has come to love the things that made her “uncomfortable” as it has allowed her to think bigger and out of the box.

When asked about her free time, Thanju talked about how much she enjoyed hanging out with her friends, and occasionally going out to eat and watch movies with them. Thanju also takes advantage of a lot of the on-campus events and activities such as playing soccer or racquetball.

“Back home, we would go out and spend hours at this one small restaurant,” Thanju said nostalgically. She misses home and is hoping to go back to Nepal after attending graduate school and experiencing working in the health sector in the United States.

Thanju also expressed her feelings about the lack of authentic Nepalese food in the United States. “There is simply nothing like home food,” she said, and many people who have travelled to different nations can testify to this. Thanju talked about her experience with two different cultures and how she has coped with it. “If I would greet a stranger back home (like I would at GC), they would think I am crazy!” said Thanju. Goshen College has a unique culture and a vibe of its own, one that is very relaxed and laid back. Thanju has really enjoyed that aspect about Goshen College.

Thanju is currently looking forward to graduation; however, she will really miss Goshen College, the community and the people, as she feels as though all these things have contributed to shaping the kind of person that she is today.