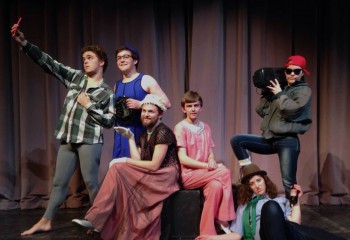 sadieIf you stopped by the Umble Center on Friday night, you would have found a crew of cross-dressing students, some on stage, and some in the audience for the second annual Miscast Cabaret. Sponsored by The GC Players, this production gave students an opportunity to don clothing of another gender and present scenes, songs and monologues that they wouldn’t normally have the opportunity to perform.

“When you do something like this,” said Flowers, “there is always the chance that someone will see this as an opportunity to get some laughs by pushing gender stereotypes. I just wanted to preface the show with those thoughts, so that no one got the wrong idea and so that people knew that we wouldn’t tolerate this behavior.”

The performance opened with a memorable dance routine by Flowers and junior Brett Conrad, adorned in dresses and purses, to the song, “Girls Just Wanna Have Fun.” The following acts were varied, including an original scene entitled “#Basic” by senior Angel Reyes and senior Clayton Pelfrey, a sneaky reading of Junie B. Jones by junior Paul Zehr (who was indeed pulling off the leggings), and an impassioned lip-synching of “I Will Survive” by first-year James Lang. The show ended with a heart-touching falling-in-love scene between two best friends from the play “Almost Maine” featuring juniors Adrienne Schmucker and Christina Hofer.

The first Miscast Cabaret was organized by former Goshen College student, Rhianna Cockrell, in the fall of 2013. Cockrell wanted to provide students with an opportunity to perform any role, regardless of their gender.

When asked about the potential controversy of the event, Cockrell stated, “Theatre is art, and art is supposed to be controversial. It’s supposed to challenge both the artists and the audience. Even comedic art, which is what Miscast usually turns out to be, has a message behind it. Without controversy, we wouldn’t have good art.” Both Flowers and Cockrell noted that this sort of event would not be possible if GC was not a safe environment.

Although The GC Players is the umbrella term for anyone who has been involved in theater at GC and receives theater email updates, The GC Players also have a board comprised of Martin Flowers, Paul Zehr, Christina Hofer, Brett Conrad, Riley Woods, Adrienne Schmucker and faculty supervisor Andrew Moeggenborg. The group meets weekly (along with anyone else who is interested) to “plan theatrical events for campus” and “voice concerns and ideas from students involved in theater and present them to the department,” according to Flowers.

He noted, “It’s basically like Student Senate specifically for GC theater.” The group is also in the process of reaching out to prospective students who might be interested in theater at GC.

In the past, The GC Players have hosted events such as the 24 Hour Play Festival and an Improv Night event. They are also in the process of bringing a show entitled “The Women of Ciudad Juarez” from The College of Wooster to Goshen.

According to Hofer, who saw the show performed at the American Collegiate Theater Festival in January, “The play is incredibly visceral and details the lives of thousands of women who have been victims in this Mexican city.”

Flowers is also excited about the prospect of this performance coming to GC, stating that he believes the show could “really shake the campus with it’s message.”