Dominique Chew: God mourns with us, too 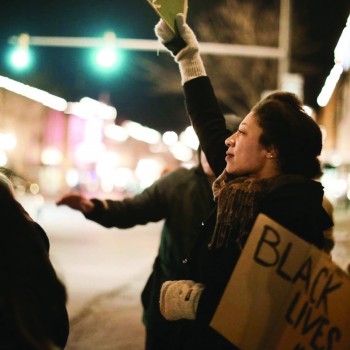 Something that folks don’t typically know about me is that I actually transferred to Goshen. I spent my first semester at the University of Nebraska-Kearney— my decision to go there was based on a community and familial-based pressure to continue my volleyball career. When I finally realized that I was burnt out and had lost nearly all of my passion for the game, I decided not to be on the team. But I ended up going to UNK anyway, mostly because it was too late to go anywhere else. As an 18-year-old who had always lived in a Mennonite bubble, I was ready to experience something new. Well, about one month into the semester, I was ready to leave. I discovered that making friends wasn’t easy when nearly everyone else at the university was from Nebraska, no one knew what a Mennonite was, and among the people I did get to know, I was the political, racial, and religious minority.

So, in January of 2012, I came to Goshen College more cynical about God, the world, love, and politics than I had ever been. Since college years are the time when our idea of faith is rattled and the perception of ourselves is shaken, I’m sure this is a feeling many of you can resonate with. I spent the first half of my first semester at GC hanging out with older friends who I knew from high school, who were also, for different reasons, turned-off by Mennonites, by religion and by our shared home community of Hesston.

Perhaps a week after arriving back to Goshen from spring break travels, I was in Middlebury visiting a friend’s home. I remember sitting in a Mancino’s, and receiving a phone call from a high school friend–someone I hadn’t heard from in ages. I remember saying out loud, “She never calls me. Something must be wrong.” But still, I ignored it. On the drive home, she called me again. And again I ignored it. When I finally called her back, she told me through heavy sobs that my dear friend Garrett had passed away. That he was killed in a skiing accident. That his heart ruptured from the impact of crashing into a pole chest first. That he died in about three seconds and that he wasn’t in pain for long.

I remember going back and forth between being the angriest I’d ever been at God and surrendering to the divine presence that shaped my dreams for four weeks after Garrett’s death. The first week, Garrett was there. I could hug him, and hear his voice, and his laugh. The next week, Garrett was there, but I couldn’t touch him. The next week, Garrett was alive but I couldn’t see him. The fourth week, I didn’t see him, or hear him and I knew that he was gone. This, I was convinced, was God grieving with me. Through this experience, I learned that I cannot believe that everything is part of God’s plan, and that at this moment, God was mourning with me. It was these moments, where just weeks before, I was so cynical about God and faith and religion, that I’d never felt closer to God. That I absolutely felt God’s presence.

Flash forward to the summer of 2013 at the Mennonite Church USA convention in Phoenix, AZ. I was talking with a dear friend and mentor from my childhood. He works at EMU and said to me, “you know what’s different about Goshen College? Goshen College students change the world.” I think he’s right. I could tell that something was different about GC when my professors that semester emailed me for the week that I was gone telling me to be present at home, not to worry (too much) about school work, that they were thinking of me and praying for me. I could tell that something was different about GC students when my floor mates bought me flowers and a card. When the very moment that the reality of my friend’s death set in, I called an old camp friend turned college friend, and they held me, didn’t ask questions, and just let me cry. In the same way that I felt the presence of God, I felt a profound sense of community here at GC.

In twenty years, I’ll reflect on my time at GC and remember the community that I had here. However, I cannot think about the gift of community that I’ve received without thinking about the great number of students on this campus who may feel uncomfortable or even irritated listening to a few Mennonites giving their faith story at a Mennonite institution. Their sentiments are valid. Only recently have I become aware of the great deal of privilege I hold on this campus simply because I am a Mennonite.

To those on GC’s campus who have felt marginalized, be you a non-Mennonite, a person of color, an athlete, an international student, a gender or sexual minority, a student with a disability—I hope that you can accept my apology for being exclusive, or talking in too much Mennonite lingo, or not hearing you, but let it be known that in all of your moments of frustration, feeling excluded, for all of the times that you were silenced or ignored, that until you are a fully integrated/heard/well-represented member of this community, God mourns with you, too. If Christ-centeredness is a value of this institution, and we want to maintain the idea that “GC students change the world,” then we—as students, faculty, and staff—must, must, have the integrity and willingness and haste to mourn with, share the burden of, and fully integrate the marginalized here, in this Goshen College community, first.