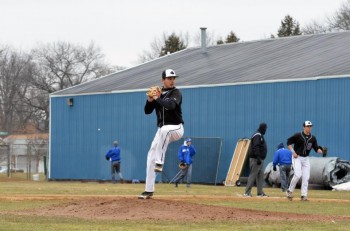 This past weekend, Goshen’s baseball team traveled to the University of Pikeville in Kentucky for two days of double-header baseball. The Maple Leafs looked to capitalize on some of the momentum from their wins over spring break, but came up empty in Pikeville, going 0-4 on the weekend trip.

In the first game on Sunday, Goshen took an early lead and appeared on their way to a victory before Pikeville got going. Junior Bryan Aponte scored on a hit by sophomore Urbano Hernandez in the second inning, and for a while it looked like that would be enough for sophomore pitcher Michael Walker. Walker pitched shutout baseball through 4 innings, before the Leafs surrendered 4 runs in the 5th inning, giving Pikeville’s A.J. Carkner more than enough support to finish off Goshen. Despite being on the mound for 4 runs, only 2 were credited as earned runs to Walker, who finished the day giving up 6 hits and striking out 2 in 6 innings of work.

Game 2 again saw the Maple Leafs jump out to an early lead, as Goshen struck for 3 in the top of the first. Sophomores Preston Carr, Vincent Caschera and Aponte all came around to score in the inning. However Pikeville would respond with 1 run in the bottom of the 1st, and 4 more an inning later. Goshen would score twice in the 3rd, with Caschera and Aponte again scoring, to even the score at 5. Pikeville scored a run each in the 5th and 6th to lead 7-5 entering the top of the 7th. Carr would cross home plate for the second time that game to bring the Maple Leafs within 1, but Pikeville’s Ronny Herndon managed to shut the door and hold Goshen off for a 7-6 win. Aponte and Hernandez both collected a pair of RBIs in the loss, while sophomore Eli Grimes contributed 1 as well. Only 4 of the 7 runs scored off Goshen’s Blake Collins were earned.

After a disappointing Sunday, Goshen looked to even the weekend with a sweep on Monday. In game 3 of the weekend, Pikeville meant business as it scored 9 runs from the 2nd inning through the 4th inning, twice scoring 4 runs in an inning. Despite scoring in 5 of 7 innings, Goshen never managed to plate more than 1 run in an inning, ultimately falling 9-5 in the end. Carr, first-year Ryan Hartig both collected 2 RBIs and fellow first-year Noah Shail added 1 of his own.

In game 4 on Monday, the Leafs continued their trend of scoring first, as junior Trevor Emery scored the game’s first run in the 1st inning of play. From that point on however, it was all Pikeville who scored runs in all 6 innings they came to bat in a 12-3 victory.

The trip may not have gone the way Goshen would have preferred as they saw their record drop to 2-8, but the Maple Leafs will have a chance to get back on track when they travel to Bluffton this Saturday, and then to Purdue University Calumet on Sunday.