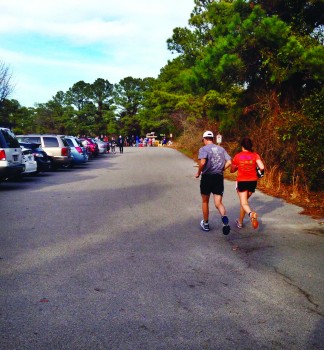 Senior Rachel Smucker rounds a corner with her father during a training run.

Rachel Smucker, a senior public relations major and business minor, likes to run. She has chosen to include the sport that many people dislike as a staple in her life. Smucker began running cross-country in middle school, and though the experience was not her favorite, she recognized that she liked running with other people. “Now it’s something I really enjoy and incorporate into my life wherever I am,” Smucker declared.

This has manifested itself in the form of five regular marathons (26.2 miles) and one ultra marathon (31.2 miles), as well as the occasional 5k and months of training. Smucker’s first marathon was the summer before her freshman year of college, in 2011. She also recently participated in Goshen College’s Indoor Marathon on February 22.

An instrumental figure in her running career is Smucker’s father. From encouraging her to run her first marathon to training with her for other long distances, Smucker’s dad also often runs with her during races. “It’s always been my dad,” she said.

Besides having her dad as an encourager, Smucker is an extremely self-motivated runner.  She explained, “I just like being able to see how far I can go. Competition with my dad so that I can beat him is there, too. But first and foremost it comes down to just me being able to prove to myself that I can do it.”

Running has taught Smucker some life lessons, like working hard for something she really wants. “I’m able to push myself to limits that I never thought I could get to,” she added. Smucker is still surprised when she can muster up the final sprint at the end of races. Another thing she values are both the physical and mental benefits of running. “I definitely feel better and happier when I’m running. Running is my time to de-stress. It allows me to focus on taking one step at a time. Running is also my time to mediate and pray, so it’s very much incorporated into my spiritual life. And I also enjoy running with other people, so it’s how I find community as well.”

In the future, Smucker has big plans. This summer, she’s helping pace her dad for a 50-mile trail marathon, and will run the last 20 miles with him. She also aspires to participate in the Comrade’s Race in South Africa next year.

Back in her hometown of Bird-in-Hand, Lancaster County, Pennsylvania, Smucker belongs to the informal running club called Vellaspringa, which means “Let’s run.” During high school, Smucker ran with the club her dad started with a group of Amish men. One of their activities includes a monthly run during the full moon, usually 9-15 miles. They were featured in an article in Runner’s World, one of the country’s biggest fitness magazines. Besides running, Smucker enjoys crafting, sewing, dancing, reading books and being outside.