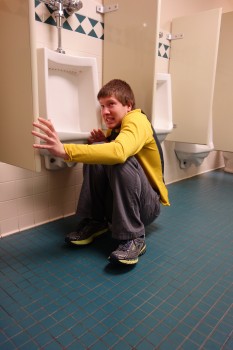 The stage is set: ten young men are huddled together in a cramped bathroom late at night. Eerie noises waft over them, accompanied by the screams of yet another victim. Suddenly, the door bursts open, flooding the room with light. The identity of the dark silhouette in the doorway remains masked.

At this juncture in the tale, one is likely wondering what gruesome weapon the attacker is wielding: is it an axe? A large gun? Or perhaps the dreaded lazer kat, a fluffy yet deadly combination of feline cuteness and mini lightsabers?

In a decidedly anticlimactic fashion, the light switch is flipped, illuminating the luscious, flowing locks of Reuben Ng, the resonant Funnies Editor of legend. Surely more questions are forming in your minds now, such as: How did Reuben score a role in a horror film? Who are these poor souls in danger of being assaulted by a dry sense of humor and incredible wit? And most importantly, does Mr. Ng use Head and Shoulders or Dove brand shampoo?

As they say, “Help will always be given at Hogwarts to those who ask for it.” Now, I’m not entirely sure how this Albus Dumbledore quote relates to anything pertinent, but I am capable of shedding some light on the aforementioned situation. Last week, between visits of the aptly named establishments, the “Funky Pirate” and “Napoleon’s Itch,” the Goshen College Men’s Chorus took some time off between our 9 concerts, 2 visits to the French Quarter, and 357 hours on the Cardinal 6916 charter bus to watch the classic film “The Silence of the Lambs.” After being unceremoniously booted from the chapel where we were watching the film, a large contingent retreated to the only remaining common space in our lodging, the restroom. This group was interrupted frequently by many choristers in pursuit of sweet, sweet relief from the remnants of their XXXL Spicy Cajun Jumbo Gumbo Bowl lunches.

Lest you think we only enjoyed the beautiful city of New Orleans over break, we also sang a copious amount, garnering queries of: Are you on Spotify? How do I get accepted into Goshen College? And, Where do you find a buggy large enough to fit your entire choir? After a week of singing, countless miles in a bus, and a lifetime of wonderful memories, I have returned to the land of snow to give you a pressing warning; it was Colonel Reuben, in the bathroom, with a sharpened toothbrush. Be ever watchful.