GC lunch and launch (your business) 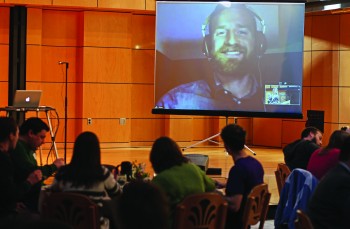 Members attending the GC Lunch and Launch event last Friday all listen to J. Sider, the keynote speaker for the event.

Lunch and Launch (Your Business) hosted a luncheon on Friday, February 27 to inform young professionals on how to start their own businesses.

Young professionals from Goshen College and the surrounding community were invited to Reith Recital Hall to eat lunch and video conference with J. Sider, a 2008 Goshen College graduate who was recently named to Magazine’s and Billboard’s “30 Under 30” and Forbes’ Music “30 Under 30” three years in a row. Sider continues to be awarded these distinctions due to his successful business BandPage, a place for musicians to network with other musicians and make them known to the world through an online presence.

Sider had an inspirational story to share with the group. Diagnosed with lymphoma at the age of 19, he had an unusual college experience because he was told he only had months to live. Though many of his days at Goshen College were spent receiving chemotherapy treatments at the hospital, he sees his time there as a valuable experience that changed his life.

“My time at Goshen College helped me see things really clearly,” Sider said. “When the doctors gave me a month to live, I realized that all the stuff we normally care about—material things, success—doesn’t matter. You just need to get out there and do what makes you happy.”

After traveling the country doing odd jobs and searching for his calling in life, he had the idea to start up BandPage, a company that started small but quickly grew to be one of the most successful music marketing companies in the nation.

He shared his inspiring story with the students who attended the event. He also gave them advice on how to start up their own companies and be ethical and successful businesspersons.