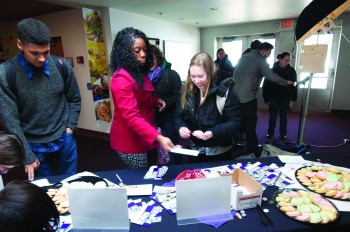 Students celebrate those who donate to Goshen College this week.

The first week in March, called “Grow Goshen Week,” is a time for thanking supporters of Goshen College.

Throughout the year, Goshen College works hard to contact people outside of the campus to raise awareness about the institution and to ask for donations that help keep the school running. According to junior Student Associate in Advancement Armarlie Grier, the Department of Institutional Advancement runs events like the annual phone-a-thon, a telemarketing operation to ask for donations from alumni, as well as sends out postcards to alumni requesting their monetary donations to support the college.

Because people are contacted year-round to make donations, Grow Goshen Week is an opportunity to take a break and thank those who donated.

Tuition Free day on Friday, March 6 is the day designated for students to thank those who donate to Goshen. Students may wonder why they should thank donors when they pay so much in tuition. Tuition Free day is the time in the semester when the tuition that students pay stops covering the operating costs of the college. According to Grier, student tuition only covers two-thirds of the total expenses of Goshen College for any given year. The rest of the money needed to keep the school running after March 6 will come solely from donations. On March 6, booths will be set up inside the Union and Westlawn Dining Hall. Students will have the opportunity to sign postcards thanking those who donate to Goshen College, not only monetarily, but also with skills and service.

“Retired faculty members volunteer to do things like landscaping other things around campus…This day is important because it’s giving recognition to people that support the college. You as a student kind of have a vague idea of what’s happening, you know that people are donating money, but [Tuition Free Day] is a way to recognize people we may not have known were involved or in ways you didn’t know they were involved. The postcards show our appreciation,” said Grier.

Other events during Grow Goshen week will be the senior gift and daily prize drawings for faculty and staff.

A large project that many students may have noticed in preparation for this week was the campaign of faculty who told the campus why they donate to Goshen College.

Jo-Ann Brant, professor of Bible, Religion & Philosophy, stated that “I give to Goshen College because I do not see it as my employer but rather as something more akin to an association to which I belong,” and also has the vision that her gift will “will make it possible for students to pursue their vocations less hampered by debt. I hope that my contributions will demonstrate to students that I support their visions for how they might change the world for the better.”

Other professors cited support for the mission of the college as their reasons for donating. Randy Horst, professor of art, was one of those professors.

“I give because I believe in the mission of the college and it deserves my support. I also give because it’s a very special and unique place. The campus community is so supportive of each other, but it is also open to questions and explorations into matters of the mind and the heart,” stated Horst.

These testimonies are a way to recognize why donation is important and people should continue to donate. However, according to Grier, these testimonies aren’t necessarily to encourage current students to give. Grier commented that students are considered alumni after two years of attendance at Goshen, so they may receive postcards in the mail asking for donations. However, these testimonies are primarily a way to encourage students to think about giving after they graduate from Goshen and to highlight the reasons a Goshen education is a unique and valuable experience.