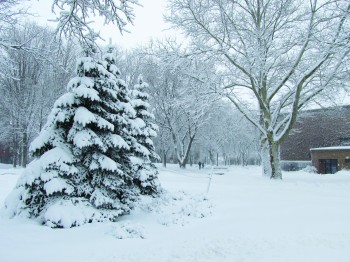 Snow covers evergreen trees along with the rest of campus after a storm.

As the snow piled up over the last weekend, Northern Indiana was once again blasted with frigid single-digit air, forty-mile per hour winds, white out conditions and another “state of emergency.”

Snow is one of the many seasonal hiccups that people in the Hoosier state are well accustomed to; however, driving and navigating through winter conditions never gets any easier no matter how many layers of salt grit are dropped.

In the past two years, Elkhart County has been faced with extreme winter conditions that make driving to class for commuters dangerous. It requires allowing extra time to brush thick snow off of windows and waking up even earlier to make it out of the driveway. Even if the car spins its tires through monumental snowdrifts down the drive, there are still miles to drive with hands gripped on the wheel before arrival at the college.

In the past, Goshen College has prided itself on the fact that it has only cancelled due to weather related conditions a select few times. This hasn’t been a huge issue, considering it is only my second year at the college as a student and commuter, and one of those few times classes have ever been canceled was during last year’s historic snowstorm. Driving in the snow always brings its own obstacles that every commuter and staff member should be prepared for; however, driving in “winter storm warnings” and blizzard-like conditions is a completely different story.

Receiving emails that warn students about the icy conditions of the sidewalks is always a nice precaution, but as I’m driving home and fishtailing across the road, the sidewalks on campus aren’t as much of a concern.

When the forecast is predicting serious winter weather conditions I have become accustomed to bunking with friends in the dorms to save myself a hazardous drive, but not every commuter has access to dorm rooms that they can hunker down in. For those commuters and staff who live far from campus and take the country roads, driving to class when the roads are just beginning to be plowed creates a treacherous drive. Even sitting through classes watching the thick lake-effect snow glitter across the classroom windows is not only nerve-wracking, but also distracting. As other commuters can confirm, it’s hard to concentrate on the content when all you can think about is the best route to get home safely.

Being a Goshen local and knowing the reoccurring weather patterns, it’s safe to say that the winter weather won’t be going anywhere for a long time. Even though a majority of the professors live across the street from campus and feel it is important to keep class available to anyone who is within walking distance, if class isn’t canceled, it is assumed of all students that attendance is necessary. In cases where absence is excused, there is still an overwhelming feeling of guilt that the lesson won’t be able to be made up or that a significant part of the class was missed.

I respect that having classes in session is important for all students and faculty who live close to campus, but I hope in the future for the sake of everyone roughing the roads that the college communicates the importance of commuter safety as well. Keep in consideration the risks we take when we go out on the roads.