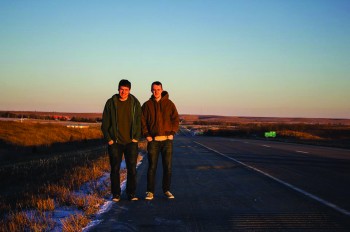 Senior communication majors, Benson Hostetter and Jared Zook pause to take a photo in Kansas on their drive to Los Angeles, California.

Benson Hostetter and Jared Zook, senior communications majors with a concentration in film, are currently studying at the Los Angeles Film Studies Center located in West Hollywood.   Hostetter and Zook road tripped to California the week before classes began, spending time with several of Hostetter’s relatives. Upon arrival in LA, the two had a weeklong program orientation.

The LA Film Studies Center runs every semester and hosts about 50 students this spring from students in colleges from around the country. Their purpose is to “train students to serve in various aspects of the film industry with both professional skill and Christian integrity.”

The two students attend seminar classes and electives on Tuesdays and Thursdays on the sixteenth floor of a skyscraper that houses the program.

On Tuesday mornings, they attend a class entitled Faith and Artistic Development. “It connects faith and film in Hollywood,” explained Zook. In the afternoons, the students split into four groups and work on creating a short film.

While 20 students pitched a story idea for the films that would be produced, a story by Hostetter entitled “Wiener Boys” was one of the four chosen. His film features two boys who own a hot dog stand.

Hostetter does sound design for his group’s short film, and Zook is the Director of Photography in his group.

On Thursdays, the students participate in elective classes. Hostetter is taking an acting class and said, “My class is super cool. We have learned a lot about relaxing and how to act for a camera as opposed to theater and the subtleties that are required for camera.” Zook is learning about narrative storytelling, so the class creates short films and critiques them in small groups.

Besides seminars and classes, each student has an unpaid internship on the other three weekdays. Students were encouraged to find one on their own, but were assisted if they had difficulty.

Hostetter works at a small production company called Bandito Brothers, which has helped produce movies such as Need for Speed and Act of Valor, and the sister company, Cantina, has worked on Iron Man.

Zook’s internship is with the online version of LA Review of Books, a literary arts magazine. He assists the audio video director with interviews, but also works on a side project that will be featured on the website. Similar to Humans of New York, Zook is creating short video interviews called Humans of Venice Beach.

Hostetter and Zook live in a gated apartment tower complex with 12,000 other residents. The 50 Film Studies students live in groups of five, with students from different universities arranged together.

Both are enjoying the LA community because of its vitality and young population. “There’s so much to do every day of the week. I never really feel bored,” said Zook. The warm weather was also appealing to the two.

Their experience at FiveCore Media with Goshen College has been beneficial to their success in the program. “Working with other people is a big thing. Goshen prepares you really well in knowing how to be friends with people and be in a community. That’s pretty much what you have to do here, too,” Zook elaborated.

They have appreciated their time in LA, and would recommend the program to other students. The semester is required for film concentration communication majors at Goshen. “The professors really understand the film culture here. The organization is really good and they have a good network,” said Zook.

While both are unsure of their future plans, this semester has broadened their film knowledge and opened their options to different paths for film.